As a child, David Oshinsky explored the wonders of America in an un-airconditioned, stick-shift Chevy, packed to the roof with traveling gear for his family of four. The son of two schoolteachers remembers spending every summer the same way: criss-crossing states as they visited national parks, historic landmarks, presidential libraries and state fairs.

You name the place, he’s been there: Mount Rushmore, the Alamo, Hoover Dam, Washington, D.C., the Grand Canyon, Colonial Williamsburg, the Rocky Mountains.

“My parents opened up America to us during those impressionable times,” Oshinsky says. He credits the annual odysseys with laying the foundation for a life-long love of the nation.

Today, Oshinsky takes his students and readers on an equally eye-opening, but much less cramped journey, sharing his fascination with all things American in the climatecontrolled classrooms of Garrison Hall and through page-turning historical accounts of cultural phenomena such as the polio epidemic, Jim Crow justice, the McCarthy era and capital punishment.

“What interests me are pivotal people and events that really shed light on our culture,” Oshinsky says. He believes that some of the most memorable events in his lifetime, such as the assassination of President Kennedy or the lunar landing may not be the most significant.

“One was so tragic, the other so uplifting,” he says. “But I don’t feel that either event had historical legs. Certain technological breakthroughs and personalities—the invention of the personal computer, Jonas Salk, Bill Gates, or even Michael Jordan—have had a far greater, long lasting impact on the direction of our culture.”

The University of Texas at Austin recruited the Pulitzer Prizewinning author from Rutgers University in 2003 to bring this sense of the big American picture to students. He believes it is essential that every student take at least one American history class and a global history class.

“It’s such a mistake to let students who do well on the Advanced Placement exam to opt out of college-level history classes,” he says. “We desperately need to emphasize the importance of history because it does repeat itself, and there are great lessons to be learned by studying it.”

As an engaging storyteller, Oshinsky encourages students to think critically, separating important ideas from peripheral ones and synthesizing large quantities of information before they realize they are learning something. And he does it without the technology that is ubiquitous in college classrooms—he does not use PowerPoint presentations, slides or movies.

The students do not seem to mind: since coming to the university, Oshinsky has earned the Raymond Dickson Centennial Teaching Award and has been inducted into the Academy of Distinguished Teachers.

Not just an ivory tower scholar, Oshinsky played a role in a historical subplot in the 1990s, when the New York Times asked him to determine whether new evidence had materialized in the murders of Civil Rights-era workers Michael Schwerner, James Chaney and Andrew Goodman—the infamous “Mississippi Burning” case of 1964.

Reliving one of those long summer road trips with his parents, Oshinsky invited his college-age son, Matthew, for a first-hand experience in investigative journalism. Father and son pored over newly opened files of the State Sovereignty Commission and tracked down Edgar Ray Killen, a local Ku Klux Klan leader involved in the murders who had been set free when the jury deadlocked during deliberation.

Through a series of events, Oshinsky and Matthew found themselves at Killen’s remote farm for supper, served with an unnerving helping of outlandish claims and racial epithets that left them wondering how Killen had managed to escape justice. 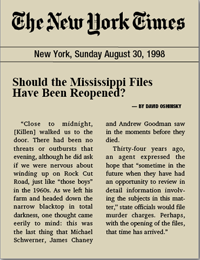 In Oshinsky’s 1998 New York Times article about the new evidence in the case, the historian suggested that the time had arrived for Killen and other suspects to be prosecuted again for their crimes. The article helped reawaken interest in the case, and seven years later, Killen was retried and imprisoned. It’s not quite the stuff of an Indiana Jones movie, but probably as close to being a scholarly action hero as Oshinsky cares to come.

For now, he travels mostly between Austin and New York, where he will serve as a distinguished scholar in residence at New York University during the fall terms for the next five years. He will return to teach at The University of Texas at Austin every spring and to cheer on his beloved Longhorns on fall weekends.

He’s also working on his next book, a medical history of New York City. With this latest book, as with the others, Oshinsky’s goal is to put historical events into perspective, to figure out what has staying power in the American psyche.

“When you start really examining these cultural watersheds, you begin to understand the world isn’t going to end with the next crisis,” he says. “New problems arise and are solved. The genius of our society and our nation, especially, is that we’re moving forward.”