As Judith Langlois walks through the state-of-the-art children’s research lab in the Sarah M. and Charles E. Seay building, she recalls the three-room schoolhouse in Hot Springs, Arkansas, where she found her passion for science.

During an era when many parents and teachers believed women lacked the mental capacity to excel in math and science, Langlois was never exposed to the debilitating and inaccurate stereotype.

“Opposite from what most people would expect, the math and science teachers were always women, and the social science teachers were usually men,” says Langlois, who today is vice provost and the Charles and Sarah Seay Regents’ Professor in Developmental Psychology. “It was an unusual situation, and fortunately, it never occurred to me that women couldn’t succeed in math and science.”

While pursuing her undergraduate degree at Louisiana State University, Langlois enjoyed her introductory-level classes, except for Psychology 101.

“My first psychology class was so boring because we were just taught to memorize basic information,” Langlois says. “But when I took my second psychology course, I was stunned when I realized that I could apply scientific research to understanding the human mind. That’s when I said to myself, ‘Wow, this is it. This is what I’m going to do.’”

Now a leading researcher in children’s development, she has received national attention for her groundbreaking studies that reveal children and infants have a sense of what is attractive. However, she admits she initially thought the idea of studying attractiveness in the context of child development was absurd.

while defending her doctoral dissertation on how preschool children form friendships, she was taken aback when a professor asked if she factored in the children’s attractiveness into her study.

“I didn’t say it at the time, but I thought to myself, ‘What a ridiculous question,’” Langlois says. “Why would attractiveness be important to young children?’”

When she returned to her research lab, she tried to shrug off the notion that attractiveness mattered to preschool children.

But the question continued to bother her.

“It was just another loose end that needed to be tied,” Langlois says. “I didn’t think the professor’s hypothesis that children formed their friendships based on looks was valid. It shouldn’t have been true, but it is true.”

She wanted to prove the professor wrong, so she began to observe children’s social interactions by pairing them up based on their attractiveness. She found, to her astonishment, that children consistently favored their attractive classmates.

After conducting numerous studies with preschool children, she began to wonder, “how early does this start?” She then switched gears from studying young children to infants and discovered that attractiveness was significant–even to infants.

In a series of studies, she tracked the amount of time a baby spent gazing at a pair of pictures: one of an attractive face, the other of a face that was less so. Her findings showed that even 3- and 6-month-old babies showed a positive bias toward attractive faces when they stared significantly longer at the attractive headshots.

Her research suggests the phenomenon of positive bias toward attractive people may be an inevitable consequence of the mechanics of human cognition. But when people are aware of their biases, they can make a conscious effort to correct themselves, Langlois says.

“Humans are very cognitive beings,” she explains. “Even though we might be biased, we have the cognitive ability to change our behavior–that’s what makes us human.”

In addition to being a world-class researcher, Langlois is a highly respected academic leader.

Since joining the university’s faculty in 1973, she has served in several key leadership roles on campus, including past associate dean of the College of Liberal Arts and interim dean of the college in 1998 and from 2006 to 2007. In 2006, she earned one of the university’s highest awards, the Civitatis Award.

Although Langlois initially struggled against the idea of leaving her lab in 2007 to become vice provost, she could not resist the call to service—and the opportunity to solve problems within the university. Her responsibilities include leading academic program administration and academic governance issues, as well as overseeing ambitious initia¬tives such as the gender Equity Task Force.

From helping parents bond with their children to developing strategies for eliminating the university’s faculty gender inequity, Langlois’ underlying goal is to help people.

“I have the best job in the world,” Langlois says. “Having the ability to solve problems, to teach students, to further science, and most importantly, to help people better understand their children is truly exhilarating.”

Beauty and the Babe 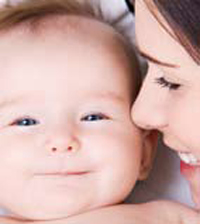 What is beauty? For centuries, philosophers, scientists, and poets have pondered vexing questions such as: Are perceptions of attractiveness innate or culturally projected? Are they timeless or timely?

Psychology researcher Judith Langlois has discovered the mystery of beuaty may, at last, be understood. According to her studies, attractive faces are, in fact, mathematically average.

Using a computer program to digitize and average numerous faces of male and female college students, she found averaged faces are more attractive than most individual ones. The more faces added to the composite (up to 32), the more attractive it became. Her studies revealed babies consistently look longer at the averaged faces.

This preference may lead to the formation of the “beauty-is-good” stereotype, Langlois adds. According to her research, babies process information into “good” and “bad” categories.

“Beauty is associated with consonant music, smiles, and kindness, whereas unattractive faces are categorized with dissonant muisc and frowns,” Langlois explains. “And that’s the first big step toward forming a stereotype.”