In 1972, the United States Supreme Court delivered the longest and one of the most bitterly divided rulings in history.

In a 5-4 decision in Furman v. Georgia, the justices ruled that the death penalty violated the Eighth Amendment’s ban on cruel and unusual punishment and the Fourteenth Amendment’s right to due process.

The result was a de facto moratorium on executions nationwide. Death penalty abolitionists heralded the ruling as a victory. The gas chamber and the electric chair would soon, they believed, be barbaric relics.

But as University of Texas at Austin historian David Oshinsky reveals in his swiftly moving book “Capital Punishment on Trial: Furman v. Georgia and the Death Penalty in Modern America,” (University of Kansas Press, 2010) capital punishment would soon be restored. In the years following Furman, rising crime rates, revised death penalty statutes and popular support would combine to turn the tide and usher in an era in which even more people have been executed, with Texas leading the nation.

Never before, Oshinsky says, had an issue taken up so much of the Supreme Court justices’ time or so painfully divided them — and the country as a whole.

“We all have feelings about issues surrounding criminal justice, vengeance, fair play, retribution,” Oshinsky says. “Those issues are all part of the capital punishment story.” As he did in his 2006 Pulitzer Prize-winning book “Polio: An American Story,” Oshinsky, who holds the Jack S. Blanton Chair in History, brings to life the key players — from justices and lawyers to killers and victims — in one of the most controversial subjects of our time. He helps readers understand the current debate on the death penalty, including the roles of race, economics and region.

His colleagues say Oshinsky has a gift for synthesizing the components of a complex issue, making history accessible to both experts and lay people.

“David has the journalist’s eye for detail, the storyteller’s sense of narrative, and the historian’s scholarly discipline, depth of knowledge and informed judgment,” says fellow history professor Michael Stoff, who is also director of the Plan II Honors Program.

“‘Capital Punishment on Trial’ is concise (144 pages) and compelling,” says Jordan M. Steiker, who holds the Judge Robert M. Parker Endowed Chair in Law and is co-director of the Capital Punishment Center at The University of Texas School of Law.

“The greatest contribution of this work is the style of the volume, which is more conversational,” Steiker says. “It gives the reader a very clear view of a vast landscape of the American death penalty without the sort of complicated overlay that legal scholars tend to bring to the project.”

Oshinsky says he wanted to give Americans a book to help them understand the issue in its political and historical context and confront the challenge that Furman v. Georgia laid before the court.

“The death penalty is the ultimate punishment,” says Oshinsky, who does not take a position on the death penalty in the book. “It’s irreversible, and the legal standards must reflect this sobering fact.”

Furman was poor and black; the victim, William Micke, was white — a common equation in cases that resulted in death sentences. Furman’s legal aid attorney was paid only $150 to defend him, and Furman was convicted and sentenced by a jury on which 11 of 12 members were white in a state haunted by Jim Crow segregation.

The case tapped into America’s growing unease with capital punishment. No one in the U.S. had been put to death for several years. Public support had waned and there was a sense that what the court termed our “evolving standards of decency” would not tolerate executing citizens.

As he appealed the cases to higher courts, Furman’s appellate lawyer, Anthony Amsterdam, hammered at the arbitrary nature of the death penalty. The punishment was defined at that time, he argued, by its infrequency.

Amsterdam, a University of Pennsylvania law professor known as a masterful courtroom advocate made his case this way, Oshinsky writes:

“[T]he sentence had been inflicted on that ‘predominantly poor, black, personally ugly, and socially unacceptable’— all of whom had been capriciously selected to die.”

After five years of appeals, Amsterdam succeeded in saving Furman’s life and persuading the high court to rule capital punishment, as then practiced, unconstitutional. Hundreds on death row had their sentences commuted.

Amsterdam, Oshinsky writes, told himself, “That job is done. Those guys are gonna live.”

But the apparent victory was complicated. The justices were so divided that each one wrote a different opinion.

“There would be no consensus, no majority opinion, not even a plurality opinion,” Oshinsky writes.

While abolitionists celebrated, capital punishment advocates saw an opening in the decision.

“What is really interesting is that Furman did not outlaw capital punishment,” Oshinsky says. “It said if ‘you want it, you have to rewrite your laws.’”

To make the punishment less arbitrary, 37 states rewrote their laws, some providing a bifurcated trial, separating the guilt phase from the penalty phase, and allowing juries to hear aggravating and mitigating circumstances to determine if a convicted murderer should die. States also implemented appellate reviews of death sentences.

Texas, which did not have a sentencing option that allowed for life in prison without parole, passed a new law that said death should be imposed if the jury believes a defendant is likely to kill again.

North Carolina’s legislature went a step further in response to Furman — mandating the death penalty in first-degree murder cases, generally defined as premeditated murders or those committed during a felony. This made it difficult for lawyers to appeal death sentences on the grounds of racism or capriciousness.

Popular opinion had also shifted in favor of the death penalty as the crime rate soared in the late 1960s and 1970s. President Nixon billed himself as a law and order candidate in 1972, Oshinsky says, in contrast to a “mealy-mouthed” court that he painted as soft on crime.

When, in 1976, death penalty appeal cases from five states, collectively known as Gregg v. Georgia, came before the Supreme Court, justices found that the sentencing rules in North Carolina and Louisiana did not pass constitutional muster. But in the other three states, including Texas and Florida, they ruled that the revised death penalty laws met the standards laid out in Furman and did not violate the Eighth

Amendment of the U.S. Constitution’s prohibition on cruel and unusual punishment or the Fourteenth Amendment’s right to due process. 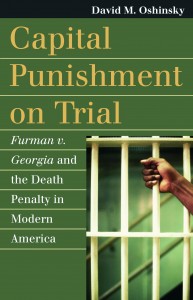 Whether he’s telling the story of capital punishment, polio, or other issues, Oshinsky distinguishes himself as a historian by delivering gripping, personalized accounts of American history’s characters and events.

“I see myself as a storyteller,” he says. “I pick big themes and tell the story through powerful characters. In ‘Capital Punishment,’ it would be Furman, it would be Tony Amsterdam, it would be (Texas serial rapist and killer) Kenneth McDuff. I really am a narrative historian.”

Oshinsky’s passion for American stories was nurtured by his parents, both public school teachers in New York City. During the summers, his family would pile into a battered Chevy and tour the country’s national parks.

“At a very early age, I got a very good sense of the United States and its history,” he says.

After earning a bachelor’s degree from Cornell University and a doctorate from Brandeis University, Oshinsky taught for 26 years at Rutgers University. He came to The University of Texas in 2001.

As a historian, Oshinsky, 65, says he is always “looking for new territory” rather than focusing on a single field. He has written about Sen. Joseph McCarthy, race, crime and punishment in post-Civil War Mississippi, and the polio scare of the 1950s. He won the Pulitzer Prize in History for “Polio,” which captures the terror of American families and the intense pressure and competition among scientists, including Jonas Salk and Albert Sabin, who raced to develop a vaccine.

“There’s no one who has a finer reputation among American historians than David Oshinsky,” says his friend and fellow history professor H. W. Brands, whose book, “Traitor to His Class: The Privileged Life and Radical Presidency of Franklin Delano Roosevelt,” was a finalist for the Pulitzer Prize in History last year.

Sam Tanenhaus, editor of The New York Times Book Review, to which Oshinsky is a regular contributor, says Oshinsky’s work “fits into the classic American tradition of historiography … that combines rigorous scholarship with journalistic flair.”

In the Oxygen in Texas

The capital punishment debate had always intrigued Oshinsky. He touched on it in his 1997 book “Worse Than Slavery: Parchman Farm and the Ordeal of Jim Crow Justice.” But living in the state with the “busiest execution chamber” sparked his desire to research the topic more thoroughly.

“It’s in the oxygen here,” Oshinsky says. “It’s more on people’s minds than anywhere else.”

Texas, which reintroduced capital punishment using lethal injection in 1982, leads the nation in the number of executions with more than 450.

“Americans do believe that there are some crimes that are so heinous that justice can only be found in the death penalty.”

And the death penalty may play a role in Texas Gov. Rick Perry’s re-election bid this year. Perry faces criticism for his handling of a report that cast serious doubt on the arson murder investigation that led to the 2004 execution of Cameron Todd Willingham.

Capital punishment — from the public hangings to the private electrocutions he details in the book — has long gripped the American consciousness, Oshinsky says. It doesn’t affect tens of thousands of people, he says, yet most people hold an opinion about it.

He points to Connecticut where the governor last year vetoed the legislature’s bill to abolish the death penalty. The state was still reeling from the 2007 home invasion in which two parolees allegedly terrorized a family for hours before murdering a mother and two daughters.

Oshinsky intentionally withholds his own opinion. The book, he says, is meant to inform rather than advocate a position.

“What I really want to do, particularly for a college audience and perhaps a law school audience, is to raise the key and often wrenching legal and moral issues without injecting my own biases and personal views,” he says.

To accomplish that, his book documents the evolution of the death penalty in the decades following Furman. After states reintroduced capital punishment, the Supreme Court began to place limits on the death penalty, banning its use in rape cases and preventing states from executing juveniles and the mentally ill.

In the 1980s, appellate lawyers presented the courts with research showing that a death sentence was far more likely in cases where a white person was murdered, regardless of the race of his killer.

The book also reveals some disturbing statistics and stories about the most dangerous criminals whose death sentences were commuted after Furman. One of them, Kenneth McDuff, left a new trail of victims across Central Texas after his 1989 parole.

Almost four decades after Furman, Oshinsky says, America finds itself in a similar place. Executions again are down. While roughly 65 percent of the public still supports the death penalty, polls show that support weakens when life without parole is presented as an alternative.

And the argument for capital punishment is still punctured by examples of racial and economic disparities, the cost of death sentence appeals, fear that innocent people have been executed and the lack of evidence showing executions are a deterrent to murder.

The punishment is also still capricious, Oshinsky says, noting the greater likelihood of a convicted murderer being sentenced to death in Harris County, Texas, than, say, Travis County.

Still, he says, just when it seems capital punishment is fading, “some horrific case will bring us back to square zero.”

Gruesome cases — such as the home invasion murders in Connecticut and the Oklahoma City bombing — keep capital punishment from disappearing, Oshinsky says.

“Americans do believe that there are some crimes that are so heinous that justice can only be found in the death penalty.”