Poetry is not meant to be read with the eyes alone, but also with the ears.

As University of Texas at Austin English professor and Milton scholar John Rumrich explains, the true meaning of verse can’t be divined just by looking at the words. It must be read aloud. The poet’s words must be heard.

“The tough thing for me in teaching ‘Paradise Lost’ is that students can’t always read it on the page and understand it. But you read it aloud and the lightbulb goes on,” Rumrich says. “Inflection conveys understanding.”

That simple belief drove Rumrich and former graduate student Olin Bjork to develop a revolutionary, multimedia teaching tool for Milton’s “Paradise Lost.” It has since inspired fellow English professor and Walt Whitman scholar Coleman Hutchison to do the same for “Leaves of Grass.”

Through technology the professors developed with the Liberal Arts Instructional Technology Services (LAITS), students can listen to actors read the two works aloud. Those students can simultaneously follow along online on texts derived from the original publications and, with a click of the mouse, search for a phrase in Whitman’s poem or look at annotated notes in Milton’s.

The goal is to help students learn by allowing them to experience the poem—the words, the structure, the sound—as the poets originally intended.

“I want my students to be in that place Milton made for them,” Rumrich says.

And not just his students.

Between October 2008 and October 2009, the “Paradise Lost” website had 25,000 hits, including some from high school students at St. Andrew’s Episcopal School in Austin.

And Hutchison has heard from instructors as far away as Spain who are using the “Leaves of Grass” site that went live in 2008.

“The ability to produce this at The University of Texas at Austin is as immediate a contribution a public university can make to education,” says Hutchison. “It affects people’s relationship with literature.”

The professors’ efforts built on an LAITS project from the early 2000s that recorded and posted a reading of the 13th century Spanish epic “El Cantar de Mio Cid” along with extensive commentary, translations and images.

“I don’t think there’s anything else like this out there,” says Joe Tenbarge,  assistant dean for technology in the College of Liberal Arts and director of LAITS.

“I looked around and saw a lot of audio recordings of these texts and a lot of online texts,” he says. “But I didn’t find anything that combines a scholarly, annotated online text with recordings specifically designed for students’ ears. And that’s what we’ve done.”

As he began work on his dissertation about Milton in 2004, Bjork noticed that same gap in literary websites.

“What I saw online were endless, scrolling columns of text,” says Bjork, who has since earned his Ph.D. and is now completing a fellowship at Georgia Tech. “In my prospectus, I sketched what I wanted to see—something that used the best qualities of the book but also used multimedia and audio.”

Rumrich, Bjork’s adviser, proposed to him that they create such an “audiotext.” Working with an undergraduate technology assistant named Shea Suski, they developed a prototype and received a grant from LAITS to help make “Paradise Lost” more accessible to students.

And if ever there was a poem meant be read with the ears as well as the eyes, Rumrich says, it was Milton’s 17th century epic about God, Satan and the fall from grace.

“As a blind man, Milton composed his epic aloud,” Rumrich explains, “dictating it to amanuenses and insisting that he was merely relaying what the Muse had dictated to him as he slept.”

More than 2,500 University of Texas at Austin students a year study sections of the 12-book poem in the school’s required sophomore literature course and other classes. After Shakespeare, Milton may be the most studied poet on campus, Rumrich says.

In 2005, he and Bjork gathered a small group of faculty members to act out the poem. Rumrich narrated the story and guided the others on how to approach their parts.

The group spent nearly 30 hours in the LAITS audio studio in the basement of Mezes Hall recording Book IX of “Paradise Lost,” the fall from grace. Audio engineers Michael Heidenreich and Sean Neesley then spent more than 100 hours choosing the best cuts and editing them into the 80-minute recording that went online that fall.

Rumrich, Bjork and other actors have since recorded Books I and II. Over time, they hope to record the rest of the epic and possibly create a version for mobile devices, Bjork says.

But as important as it is for his students to hear the poem, Rumrich also wants them to maintain their connection to the visible word. Thus, the Flash-based “open book” format of the Web page where the verse that’s being read is highlighted on screen. Annotations are available. Modern and original versions can appear side-by-side. Students and professors can add their own audio recordings and mark up the text for themselves, as they would a textbook.

And a virtual bookmark (decorated with a Biblical serpent) even lets the reader navigate through the text.

“I want us to hold onto the norms of sitting down with a book and reading,” Rumrich says. “I don’t think you throw out 500 years of the print culture that we’re part of.”

Inspired by what he saw with “Paradise Lost,” Hutchison two years ago set out to make “Leaves of Grass” equally accessible to students—but to do so in a way that reflected the values of the 1855 Whitman work.

“This is a self-consciously and deeply American work,” Hutchison says of the collection of poems, which celebrates the senses, humanity and nature and begins with “Song of Myself.” 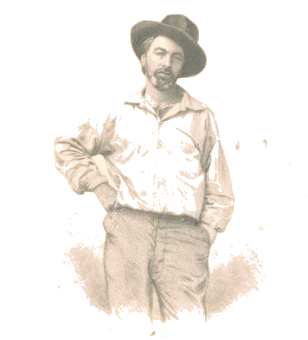 “It’s the most popular and most important American long form poem,” Hutchison says.

When it was published, “Song of Myself” was part of a performance culture in which poetry was regularly read aloud in schools, homes and at poetry readings.

Such public readings are now rare. And, without them, many students are unable to develop a deep connection to the work, which begins with “I,” ends with “you,” and is written to foster an intimate relationship between poet and reader, Hutchison says.

Its long stanzas also make the poem look like prose to the modern eye.

“Many read it like prose and miss out on some of the formal elements of the poem,” Hutchison says.

Bjork, who worked closely with Hutchison on the website says: “This brings the poetry out.”

Instead of using a single voice to narrate the poem, Hutchison chose to “democratize” this quintessentially American work by having six separate voices read “Song of Myself.” The readers are six men and women ranging in age from 20 to 70, one with a Southern drawl, one with Shakespearian training and each with his or her own style.

None were Whitman experts (or as Hutchison calls them “Whitmaniacs”) and when they asked for guidance on how to read the text, Hutchison gave the same answer: “How do you sense Whitman would want it to be read?”

As with the “Paradise Lost” project, “Leaves of Grass” appears online as an open book. A pointed hand — taken from a marker that Whitman drew in one of his notebooks — guides the reader from line to line as a voice of the reader’s choosing speaks the words.

With “Song of Myself” now online, Hutchison hopes to complete audiotexts for the other 11 poems in “Leaves of Grass” at some point in the future.

While more people read books online today than five years ago, Bjork says he still knows of no other programs that combine the original book with annotations and audio recordings the way The University of Texas at Austin programs do.

“It provides a rich online reading environment for a literary text,” he says. “We’re still kind of unique in that way.”

Even before the project was complete, its power was evident to those involved, including Heidenreich. The audio engineer had never actually read “Leaves of Grass,” opting instead to read CliffsNotes when he wrote a paper on the poems in high school.

“This work is the payment I had to make in return,” Heidenreich jokes. “But when something that’s supposed to be read is read, it’s so much more powerful than reading it in your head. It’s such a joy.”