The Not so Missing Link

Scientists have discovered the key to understanding human evolution,” booms a typical movie-trailer voice in a History Channel documentary. “The chain is no longer missing a link.”

Unfortunately, the scientists behind this documentary ignored 20 years of research, according to University of Texas anthropologist Chris Kirk.

Last year, an article on a nearly complete fossil, Darwinius masillae, was released along with a book, a History Channel documentary and an exhibit in the American Museum of Natural History. They claimed Darwinius as the secret to understanding our past.

“Many lines of evidence indicate that Darwinius has nothing at all to do with human evolution,” responds Kirk, co-author of an article this spring in the Journal of Human Evolution that debunked the earlier claims.

Kirk and his coauthors present evidence that the 47-million-year-old Darwinius is not a haplorhine primate like humans, apes and monkeys, as the 2009 research claimed. Instead, Darwinius is a strepsirrhine.

Many analyses of primate evolution over the past two decades have concluded that strepsirrhines are not direct ancestors of modern humans.

“Every year, scientists describe new fossils that contribute to our understanding of primate evolution,” says Kirk. “What’s amazing about Darwinius is, despite the fact that it’s nearly complete, it tells us very little that we didn’t already know from fossils of closely related species.”

The Weight of Friendship

Many girls struggle with the cultural norm that thin means beautiful.

But do these unrealistic ideals come from movies and television or from the lunchroom?

Girls are motivated to lose weight by both media and friends, but the influence of friends is more important, according to a study led by Anna Mueller, a graduate student in the Department of Sociology and the Population Research Center. The study determined that girls want to lose weight because their friends are losing weight, not because they want to look like someone thinner.

This study used data from the National Longitudinal Study of Adolescent Health, a sample of 90,000 middle and high school students in 132 schools across 80 communities.

It also suggested ways to counteract the formation of unrealistic body image ideals.

School programs that instill a sense of belonging to all cliques and promote ideals that de-emphasize the thin-to-win mentality may be key to empowering girls to lead healthy lives.

The study was published in the March issue of the Journal of Health and Social Behavior.

In her 31-year career as head coach of the women’s Longhorns basketball team, Jody Conradt encouraged her players both on and off the court. In addition to coaching her teams to a national 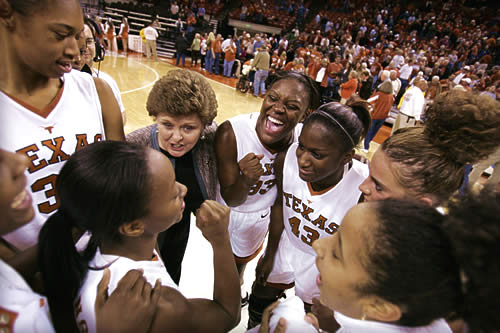 championship and an undefeated season, she helped hundreds of young women excel as players, students and future leaders.

The Jody Conradt Endowed Excellence Fund has been established at the CWGS to inspire and instruct students on the importance of leadership and equity and to promote faculty research in that area.

Initially, the endowment will support the Texas Undergraduate Leadership Program in the College of Liberal Arts. The program provides stipends, mentoring, workshops and community service opportunities to 10 women from each undergraduate class.

Daniel T. Slesnick, associate dean for research and technology in the College of Liberal Arts, has been appointed vice provost for resource management for The University of Texas at Austin.

“I look forward to working with Dan Slesnick,” says university Provost Steven Leslie. “Dan is a distinguished faculty member and a skilled and experienced administrator. He is well prepared to tackle his significant institutional responsibilities as our new vice provost.”

He began his teaching career at The University of Texas at Austin in 1982 and has taught economics ever since. In his three-and-a-half years as associate dean, Slesnick worked closely with faculty to promote cutting-edge research that has a measurable impact. He also oversaw the growth and success of Liberal Arts Instructional Technology Services, now a model for the entire university, and developed plans (and millions of dollars in cost-saving ideas) for the proposed Liberal Arts building on the East Mall.