At 16 years old, Dallas native Willie Tichenor joined the band CloverStreet as lead vocalist and journeyed to Austin to perform at the South by Southwest music festival.

“My lifelong dream is to travel around the country with five stinky guys in a van and sing for strangers every night,” Willie, who later attended The University of Texas at Austin, wrote in an assignment for one of his Plan II classes. “I think it proves that it’s not so much where you go, but what you do there and who you do it with.”

On May 14, 2003, one day before his 17th birthday, Willie was diagnosed with osteosarcoma, a rare form of bone cancer. That summer five of Willie’s friends took an eight-hour road trip to Houston on “The Bus,” a colorful clunker fit for a struggling band, which overheated nearly a dozen times along the way. However, this journey didn’t lead to Willie’s next exhilarat environmental ing tour date the young vocalist loved so much, but to join their friend after his extensive chemotherapy sessions at the MD Anderson Cancer Center.

College was delayed a year. But despite his battle with cancer, it was an exciting time in Willie’s life. He served as a worship leader for his church’s youth group at Highland

Park United Methodist Church in Dallas. He was able to delay his chemotherapy for a few days to travel with the group to build houses in Juarez, Mexico, completely by hand, while camping. He lived in an apartment in Dallas’ art district of Deep Ellum while performing locally with his band, which had a loyal following. They wrote and performed tunes like “Ryan Cabrababa, Eat My Shorts” and “Short Roll and Triplets.” More than 250 people attended Willie’s last performance with CloverStreet in June 2005, which Willie fondly remembered for his tight jeans and as the “end of a beautiful chapter in his life.” 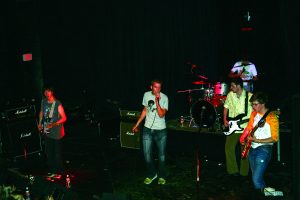 “Family, friends, faith, fun, delicious food and music were the things most important to Willie, usually all at the same time,” says Lisa Tichenor about her son Willie, who lost his battle with cancer on March 15, 2006, at age 19.

“Willie’s story is particularly compelling because not only is osteosarcoma a relatively unfamiliar and rare disease for a family to encounter, but also because Willie left such a legacy after only 19 years,” says Mary Katherine Vigness, a 2008 University of Texas graduate who knew Willie since early childhood. “He had a fun, caring and passionate nature as well as a love for helping others in any possible way.”

After Willie’s death, the Tichenor family organized the What Would Willie Want Foundation (QuadW). His parents asked nine of Willie’s closest friends to serve on the board of directors. They hoped to keep Willie’s spirit alive, keep his friends connected and to help them gain professional experience. The foundation focuses its efforts on three areas that were important to Willie: scholarship, transformative mission experiences and sarcoma cancer research.

“It is a conversation no one should ever have to have with their child—what do you want us to do when you are gone?” says Lisa Tichenor. “Willie had some very clear ideas and these ideas have been a good basis on which to carry out the work of the foundation.”

“It is a conversation no one should ever have to have with their child—what do you want us to do when you are gone?” says Lisa Tichenor. “Willie had some very clear ideas and these ideas have been a good basis on which to carry out the work of the foundation.”

The foundation’s board members, most of them in their 20s, each had a personal relationship with Willie. As a result, they all have a strong sense of what Willie would and would not do, helping the foundation stay true to its mission.

The foundation established The Willie Tichenor Scholarship in Plan II at the university as a permanent endowment to serve students planning to study abroad and who have demonstrated financial need.

“Willie valued scholarship highly, particularly his Plan II education, and I think it is important to continue funding Plan II scholarships in an effort to make exceptional education more accessible,” says Vigness, who was a Liberal Arts Honors and history major. “I would also like to see the relatively small field of sarcoma cancer research gain broader funding and support. Like other foundations funding cancer research, we want to do our part to find a cure for cancer or, at the very least, prolong patients’ lives.”

The foundation has committed $643,584 to establish the QuadW Sarcoma Biostatistics Office in Bethesda, Md., in collaboration with the CureSearch Children’s Oncology Group (COG), the world’s premiere childhood cancer research organization.

The money will make it easier for researchers to find limited osteosarcoma samples to study the disease and to pool their findings—further advancing innovative research in the field. While the cause of osteosarcoma is still unknown, the survival rate for patients— primarily teenagers and young adults—hovers around 70 percent.

“Cancer was Willie’s death, but it wasn’t his life,” says Johnny Peters, who serves on the board and became close friends with Willie when they worked together on youth ministry at Highland Park United Methodist Church. “That is why we also focus on things like helping out creative students through scholarship, and mission experiences that truly change lives.”

The QuadW Foundation helps fund the 3.0 Summer Internship to offer the mission experience, which was so important in Willie’s life, to visiting college students to work in neglected, low-income areas of Mobile, Alabama.

In addition, this past year, the WillieBuild project worked with Habitat for Humanity and Highland Park United Methodist Church to build two homes in the Dallas area for deserving families in need.

Much like the young man it honors, the foundation has big ideas and a far reach, embracing Willie’s passion, commitment to service and sense of humor.

“It is very early in the life of our foundation,” says Lisa Tichenor. “We feel an urgency to do as much as we can, as fast as we can. And we hope to do that for many years to come.”

While attending UT, Willie worked on a Plan II assignment in which he laid out a road map for his life. Inspired to follow in the footsteps of his father Mac Tichenor, a former president of Univision Radio, Willie began studies in the Plan II Honors program in 2005 and became an active member of the Texas Iron Spikes, a spirit and service organization.

“In typical form, he called me from his dorm room the night before it was due and asked me to scan and send some pictures,” says Lisa Tichenor. “He had some specific pictures in mind that I had to locate by digging through the ‘archive,’ and then he gave me some places and themes he was thinking about. It was a late night for both of us, but we had a great time.”

Lisa didn’t see the finished product until Jerome Bump, professor in the Department of English, sent it to her after Willie’s death. “The amazing thing about him was his power of positive thinking, his leadership and how he didn’t let that [cancer] stop him,” says Bump. “He is also an example of not taking your life for granted, which is a very difficult lesson for people this age. He never gave up. It’s not naïveté, it’s not denial; he’s looking right at it. He didn’t waste any of his time bemoaning his fate.

“He’s an extraordinary example to all of us at any age,” says Bump, adding that even though Willie was only in his class for four months, he was engaged every moment, teaching fellow students every minute along the way. Willie’s road map outlined what was most important to him (friends, family and band mates), and places that inspired him (the beach, Wyoming, his family’s ranch and downtown Dallas).

He began the project with this disclaimer: “The author does not make any claims as to the usefulness of this document as a ‘map’ because he still has not found his way.”

However, what Willie couldn’t have imagined was that his ideas and passions at such a young age could have inspired so many people to ask the question: “What Would Willie Want?” and to forge ahead in the same giving spirit of such an extraordinary young man.