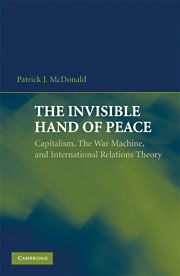 The book examines how competitive market structures and private property affect the distribution of political power within states and shape decisions for war. The more that markets, not governments, determine the winners and losers of international trade, the less likely military conflict becomes. In short: capitalism promotes peace.

Associate Professor kenneth Greene’s “Why DoMinant Parties Lose: Mexico’s Democratization in Comparative Perspective” (Cambridge University Press) won the 2008 Comparative Democratization Best Book Award. Greene recently extended his analysis of dominant party systems in the journal “Comparative Political Studies,” demonstrating that individual parties can dominate the political system through control of the public bureaucracy, which a party may manipulate by exploiting state resources for its own political ends. This incumbency advantage is driven by the size of the public sector. If the state shrinks, through privatization of state owned enterprises, for example, the dominant party is doomed.

Associate Professor Jason BroWnlee’s 2009 article in the American Journal of Political Science, “Portents of Pluralism: How Hybrid Regimes Affect Democratic Transitions,” analyzes regimes that allow substantial electoral competition for governing power but do not gain power and maintain legitimacy through wholly free and open democratic elections. These are known as competitive authoritarian regimes, and examples include Tanzania, Kyrgyzstan and Malaysia. The study demonstrates that competitive authoritarian regimes are more likely than others, after their collapse, to be followed by democracy. The result is based on tests of 158 regimes over 30 years.