Assistant Professor Zachary Elkins joined several other constitutional scholars to advise the Kenyan leaders on a new national constitution that voters there approved in August.
Elkins and his colleagues counseled officials on everything from establishing an effective balance of power to eliminating redundancies or ambiguities in the proposed constitution. Kenya’s Committee of Experts on Constitutional Review had several rounds of dialogue with the scholars on issues big and small. 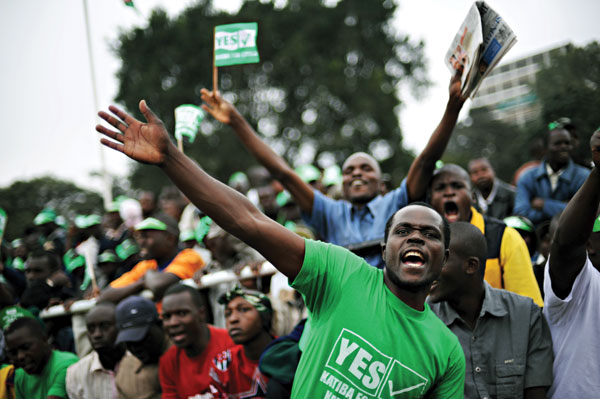 “Kenyan leaders wrote a constitution that was remarkably clear, well integrated and detailed,” says Elkins, who earned a master’s degree from the The Uiversity of Texas at Austin in 1996 and joined the faculty in 2008. “We worked with them to anticipate some of the consequences of their choices and to identify alternatives.”

Elkins directs the Comparative Constitutions Project (CCP) with Tom Ginsburg, a law professor at The University of Chicago. CCP has developed a dataset that records the characteristics of more than 900 current and historical constitutions. Their first book from the project, “The Endurance of National Constitutions,” (Cambridge University Press) recently won a prize from the American Political Science Association. The book explains why some constitutions last for generations while others fail quickly.

Elkins and Ginsburg have found that constitutions generally endure if they have flexible amendment systems, are drafted with highly participatory processes, and are extensive and precise, which they suggest indicates investment in the document. Their research has revealed that the average constitution lasts 19 years (the exact timeframe that Thomas Jefferson once proposed the U.S. constitution be in place).

Sponsored by the Rome-based International Development Law Organization, Elkins and Ginsburg convened a group of constitutional scholars to review drafts of the Kenyan constitution and provide feedback from December through March.

The East African nation of 40 million wrote a new constitution as part of a power-sharing agreement that ended widespread violence after the 2007 presidential elections. The new constitution, backed by nearly 70 percent of voters in an Aug. 4 referendum, is designed to limit presidential powers and overcome ethnic divisions.

In reviewing the draft, Elkins and his colleagues suggested that leaders might end up creating a new set of problems if they stuck with a particular brand of semi-presidential system that includes a powerful president as head of state and a powerful prime minister as head of government.

“The need for power sharing in Kenya is great, but the division of power between the president and prime minister may augur conflict,” the group wrote in December. “At its worst, stalemate between the two executives can encourage extra-constitutional action. In Kenya, recent events suggest that the obstacles to cooperation may be even greater.”

Elkins and Ginsburg participate periodically in other constitutional exercises in Latin America, Africa and Asia, and are now working with a citizen’s organization in Fiji, where constitutional deliberations appear imminent.