Ten thousand miles away on the island of Madagascar, University of Texas at Austin anthropologist Rebecca Lewis delves into the unusual world of a long-legged, white lemur. But before she can observe the animal’s behavior and collect data, Lewis must often put her business acumen and a bit of diplomacy to work at her remote research site.

Each summer, Lewis, an assistant professor, travels to the nation off the southeast coast of Africa to conduct field research on power dynamics within the female-dominant primate species known to scientists as Verreaux’s sifaka.

Her research site in the Kirindy Mitea National Park — a protected land in western Madagascar with varied ecosystems of tropical dry forest, spiny desert and coastal mangroves — has become an economic development hub in the impoverished region. About a half-dozen employees regularly work at Lewis’ camp, the second-largest employer in the area behind a salt mine.

“I employ whomever I can,” says Lewis, who also provides health care for the workers. “There’s this whole community around you that you really have a chance to positively influence.”

Lewis pays a site manager, a research assistant, cooks and manual laborers to create trails. When it’s time to place tracking collars on lemurs, she hires workers who help catch the leaping animals safely on a cloth beneath the trees as they are sedated with blow guns.

The local workers are ambassadors for the university and the Department of Anthropology. They delight in explaining the research to their neighbors and wearing the University of Texas t-shirts and hats Lewis brings them from Austin, she says.

So a devoted community of employees joins Lewis in an endeavor that straddles the fields of anthropology and biology. Lewis explains that the female lemurs dominate males, which has long been an evolutionary puzzle. Lewis was bothered that some researchers considered lemurs to be “weird,” because they are female-dominant, so she set out to explain the animals’ behaviors using economic and political theory.

“I became interested in explaining why lemurs are different from many other primates,” says Lewis, who earned her Ph.D. in biological anthropology and anatomy at Duke and has been on faculty at The University of Texas since 2004, first as a lecturer then in her assistant professor position.

Having grown up in Mississippi, Lewis, 38, put her life experience to use and recalled that Southern women typically weren’t dominant, but they did hold considerable power nonetheless. She began thinking in terms of
leverage rather than just physical dominance, such as supply and demand, sex ratios and economic power.

Female lemurs are ready to mate only one to three days per year, so there are few mating opportunities. Because of that, they hold economic leverage over the males, Lewis explains.

“The rest of the time males are just sitting there twiddling their thumbs, hoping that they make it to the next mating season so they can mate with this female. Males that provide services or resources to the female might get more opportunities to mate” Lewis says. “So you can imagine that the power dynamics are complex.”

Lewis also studies behavioral differences among males, some of whom exhibit higher levels of testosterone and have visual signals of dominance status associated with their throat scent glands.

Anthropology Professor Liza Shapiro, Lewis’ faculty colleague, says Lewis’ research is notable for its sophisticated way of looking at lemur behavior. Lemurs have smaller brains than other primates, like chimpanzees. Yet, she says, Lewis has shown that lemurs exhibit complex, nuanced behavior in their social interactions with one another.

“What I see as really unique in her research is the way she brings in economic theories and applies that to primate behavior,” Shapiro says. “I just think that’s very creative. I don’t know that there are very many people doing that with primates.”

Madagascar is a popular spot for primatological research because of its diversity of lemurs. Lewis has been working in the region since 1994. Still, she continues to deal with such obstacles as finding funding, obtaining government permits and overcoming the scarceness of food, Shapiro says.

“It’s hard,” Shapiro says. “You have to have a lot of tenacity to do that kind of work.”

There are also physical and environmental obstacles to overcome. Water is brought in every four days in 50-liter jugs on an ox cart because park officials have yet to build a well. Cyclone Fanele damaged much of the terrain and the field station in early 2009. That led to a study by Lewis that’s being published on the effects of the storm on the lemur’s food supply and health. 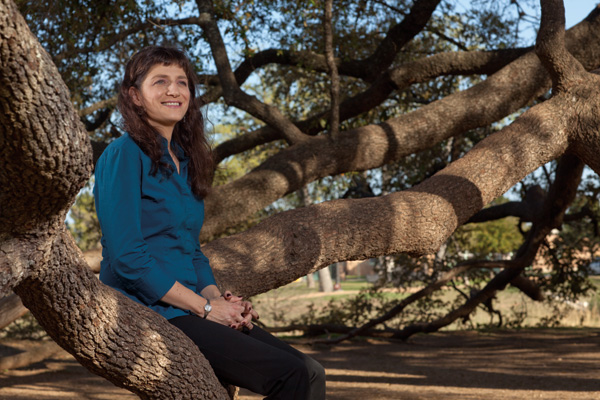 Lewis, a physical anthropologist, occasionally wades into the cultural end of the field in her encounters with nearby village elders. Once when a period of bad luck afflicted the research site, villagers told Lewis a ceremony was needed to ask the ancestors for permission to do her work. The village elders carried out rituals and sacrificed a cow, sharing the meat among the entire village. Then the research continued.

Communicating in Madagascar involves a mix of languages. Lewis speaks French with national park officials and research assistants and speaks Malagasy with the cooks, manual laborers and village elders. All data are collected in Malagasy.

Lately, Lewis has used her lemur data to work with colleagues in the College of Natural Sciences to study disease transmission.

Amid the research is the constant awareness of human interference. Madagascar and neighboring islands are the only places where lemurs exist, and about one-third have become extinct in the past 2,000 years since the arrival of humans to the island, Lewis says. The Verreaux’s sifaka is categorized as vulnerable and the habitat is very threatened.

Yet, for an anthropologist like Lewis, the faraway nation remains a research treasure trove that’s well worth the travel and challenging conditions.

“Most everything in Madagascar is unlike what you see anywhere else,” she says.

And, it’s a bonus that the local people have become so invested in her research because of the job opportunities. “It’s been great for conservation purposes because they see the value of making sure these animals are safe and protecting the forest.”