College of Liberal Arts: Not Even Past Brings History to the Public 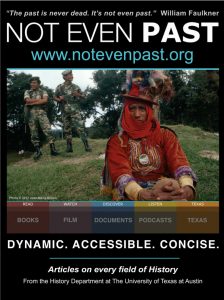 The Web has many sites devoted to history, but only one brings together such a diverse group of historians with expertise in every major field and time period. For the past year, Not Even Past has drawn on the expertise of faculty and graduate students in the Department of History to bring Texas, U.S. and world history alive through innovative, web-based tools and technologies. Originally launched in January 2011, an improved 2.0 version of the website was launched this past January with a rich mix of stories, photographs, book reviews, video interviews and podcasts. It also now has a blog, a popular Facebook group and monthly online book club discussions. The website is available to anyone, but site editor Joan Neuberger, professor of history, says “Every student who attends UT takes one or more history classes. Not Even Past is a way to keep them connected, to enjoy a little piece of history every day, and to help us all understand the on-going importance of the past in the present.”

Parenthood accelerates weight gain over the course of life, according to a new study from The University of Texas at Austin. Debra Umberson, professor of sociology, and her team of researchers analyzed data from a national longitudinal survey and found that by age 55, parents reach an average BMI in the obese zone (over 30) and peak at an average BMI of 31 by their mid-to-late 60s. But for those without children, the average BMI merely reaches the overweight zone (25 to 29) by age 55. According to the findings, both men and women who have their first child around age 26 to 27 gain the least weight over time. The further away from this age — either younger or older — the more rapid the weight gain. Umberson says the findings underscore how important it is for both men and women to maintain a healthy weight before and after they have children.

Over the last few months, the Texas Army ROTC Leadership Speaker Series has offered cadets and the UT community the opportunity to meet with Army Gen. Peter Chiarelli, a four-star general, the highest-ranking ROTC graduate in the U.S. Army and former commander of 1st Cavalry Division, Fort Hood, Texas. In December, Chiarelli discussed the Army’s work in addressing “invisible injuries” such as post-traumatic stress disorder, depression and suicide. On Feb. 24, cadets participated in a Q&A with Staff Sgt. Salvatore Giunta — the first living person to receive the United States Armed Forces’ highest decoration for valor, the Medal of Honor, for actions that occurred after the Vietnam War. His talk was titled “The Leader in All of Us.”

Researchers from College of Liberal Arts’ Center for Perceptual Systems, Johannes Burge and Wilson Geisler, director of the center, have discovered how to extract and use information in an individual image to determine how far objects are from the focus distance, a feat that until now has only been accomplished by human and animal vision. A statistical algorithm can now determine focus error, which indicates how much a lens needs to be refocused to make an image sharp. “Our research on defocus estimation could deepen our understanding of human depth perception,” Burge says. “Our results could also improve auto-focusing in digital cameras. We used basic optical modeling and well-understood statistics to show that there is information lurking in images that cameras have yet to tap.”

Their findings will be published in the Proceedings of the National Academy of Sciences.

Methylene blue, a memory-enhancing drug, may improve the speed and effectiveness of prolonged exposure therapy for post-traumatic stress disorder (PTSD) patients, according to a new pilot study by psychologists at The University of Texas at Austin, the University of Washington and the University of Pennsylvania. In prolonged exposure therapy, patients repeatedly recount a fearful event. As the patients begin to look at the memory differently, the memory has less control over their lives. Researchers predict that patients given a memory boost with USP methylene blue, immediately after therapy sessions, make more lasting gains during therapy than those who do not take the medication. Normally, about two-thirds of PTSD patients treated with prolonged exposure therapy during ten 90-minute sessions no longer exhibit PTSD, but researchers theorize the drug will help patients recover faster and better in only six daily one-hour sessions.

Charles Holahan, professor of psychology, and Marjorie Woods, professor of English, are among seven inductees who have been named to the Academy of Distinguished Teachers at The University of Texas at Austin. “Among the many ways we reward good teaching on the Forty Acres, none is more special to me than the induction of new members to the Academy of Distinguished Teachers,” says President Bill Powers, who was inducted into the academy in 1997 as a law professor. Holahan has served as both undergraduate adviser and honors adviser in psychology and is credited with shaping the current structure of the Departmental Honors Program. Woods is the recipient of the Rome Prize for the American Academy in Rome, the Harry Ransom Award for Teaching Excellence in the College of Liberal Arts, the University President’s Associates’ Teaching Excellence Award and the Chad Oliver Plan II Teaching Award.

What would it be like to shave 10 hours from your workweek? A new economics study, co-authored by Daniel Hamermesh, professor of economics at The University of Texas at Austin, suggests that when people are given extra “free time,” they are more likely to practice the fine art of relaxation than to catch up on household chores. Hamermesh and his colleagues examined data from national time-use diaries in Japan and Korea, two countries that imposed sharp decreases in standard workweek hours. Of all the activities, the researchers found channel surfing, snoozing and selfcare were the main activities undertaken in the freed-up time, while there was no increase in household production activities. Hamermesh suggests these findings lend insight into how people want to spend their free time — and how a shorter workweek could affect quality of life, especially that of Americans who work more hours per week, retire later and take much shorter vacations than those in other developed countries.

The 2012 Liz Carpenter Lecture Series featured Pulitzer Prize-winning columnist Nicholas Kristof, who spoke at The University of Texas at Austin in February. Hosted by the Plan II Honors Program, Kristof discussed his global travels for The New York Times in which he documented both the heroes fighting against human trafficking and the survivors who have themselves become activists. Established in 1984, the Liz Carpenter Lectureship has featured such notables as President Bill Clinton, President Gerald Ford, chimpanzee researcher Jane Goodall, and Maya Angelou.

Many people believe getting older means losing a mental edge, leading to poor decision-making, but a new study from psychologists at The University of Texas at Austin and Texas A&M University suggests older adults are far better at making choices that lead to long-term gain. The study, co-authored by University of Texas at Austin psychologist Todd Maddox, found that adults who are at least 60 years old are better at strategizing decisions than those in their late teens and early 20s, who tend to focus on instant gratification. “Broadly, these results suggest that younger adults may behave more impulsively, favoring immediate gains, while older adults are better at considering the longterm ramifications of their actions,” Maddox says. When making choices, younger people use the ventral striatum, a region of the brain associated with habit formation and immediate rewards. As this declines with age, the psychologists theorize that people compensate by using their prefrontal cortex, an area of the brain that controls rational and deliberate thoughts.

Scholarship Helps UT Remember the Battle for the Lost Battalion

Texans proudly “remember the Alamo,” but few remember the importance of the Battle for the Lost Battalion. Arthur Sakamoto, professor of sociology and Population Research Center affiliate at The University of Texas at Austin, wants to honor the Japanese American soldiers of the 442nd Regimental Combat Team through a Battle for the Lost Battalion Scholarship Fund. At the cost of 800 Japanese-American lives and five days of battle, the 442nd rescued 211 Texas soldiers. Sakamoto hopes this scholarship will once again raise awareness and respect for the Japanese American men who faithfully and voluntarily served their country in a time when their family and friends were rounded up and placed in internment camps. The goal is to raise $25,000 for an endowment, whose income will be used to support scholarships for deserving undergraduate students in the College of Liberal Arts.

With the surge of mobile technology, millions of people around the world are relying more and more on their flat-screen devices to accomplish their everyday tasks.

Now imagine the frustration you’d feel if you couldn’t see that screen. That’s the situation English professor John Slatin found himself in when he wanted to use Firefox 1.0 on his desktop computer, but was unable to do so because he was blind.

While all of his colleagues were using the latest in Internet technology, Slatin, who passed away in 2008, was limited to Internet Explorer, the only Web browser that was compatible with a screen-reader program. But that all changed after he proposed a class project to build a solution.

Electrical and Computer Engineering alumnus Charles Chen (BS ’06, MS ’07) decided to take on the challenge. Little did he know that this course project would lead to a highly coveted career at Google.

With Slatin’s guidance, Chen not only managed to make Firefox work with a screen-reader program, he also went on to develop more revolutionary accessibility tools for the visually impaired.

His latest development, ChomeVox, is a screen reading extension for the Chrome operating system that is primarily used for desktop computers. The program, which is also used in Android’s Web browser, gives people access to their smartphones without ever having to look at the screen.

For all his success, Chen pays tribute to his alma mater.

“I wouldn’t be at Google today if it wasn’t for UT,” Chen says. “I never could have done this without the environment it provided me.”