University of Texas at Austin Classics and Religious Studies Professor L. Michael White is equally at home reading ancient texts as he is directing the archaeological dig of the oldest known Jewish synagogue in Europe and teaching large undergraduate classes and graduate seminars.

He brings teaching and research together in writing journal articles and books.

Two of these books have won the Hamilton Book Awards Grand Prize, the university’s highest honor for the best book written by a faculty or staff member. White is the only two-time winner of the awards, which are sponsored by the University Co-op.

His latest book, “Scripting Jesus: The Gospels in Rewrite,” won the 2011 awards, and “From Jesus to Christianity: How Four Generations of Visionaries & Storytellers Created the New Testament and Christian Faith” won the 2006 prize.

The books bring together technical scholarly issues from several fields of study — classics, ancient history, literature and religious studies — while presenting ideas in a “userfriendly” way for students and a broader popular audience. 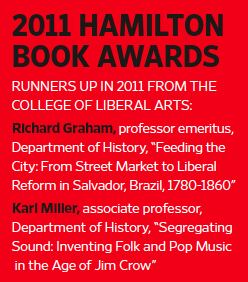 “It’s easy when you’ve got a great topic,” White says, “and this is one of the best — the Bible.”

White is well aware of the competition for the Hamilton book awards, for which 80-90 books are nominated each year. He’s been a judge twice.

“If you want to get an appreciation of what this university’s faculty really does, that’s a good way to see it,” he says. “It all amazed me.”

With a shaved head and trimmed goatee, White reminds some people of Robert Duvall, the actor.

In “Scripting Jesus,” White used approaches to storytelling, oral performance and literary criticism from classics and ancient history to explore how the four gospels of the New Testament came to be written, or, as they were at the time, performed.

“It’s a whole range of scholarly angles that, when brought together help, I hope, consolidate a lot of the critical issues in ways that people can come to understand,” he says.

He says the gospels were composed over time in a way that can be compared to a play being performed around the country before landing on Broadway in its final form.

To oversimplify, it is something like Neil Simon punching up the laugh lines in “The Odd Couple” after the run in Chicago. So, too, the gospel authors considered the audience response when crafting their stories of Jesus. The gospel authors also used different performance and literary techniques to bring their content home to different audiences.

Careful reading of the gospels reveals moments when the authors winked at the audience and the audience winked back.

“You can catch moments within each of these stories where the author and the audience are interacting,” White says. “You can really get that going. And once you catch that then we’ve just gotten inside of the situation for which each gospel was being written.”

He compares these moments of author-audience interaction to moments in “Ferris Bueller’s Day Off.”

“This movie does something that movies aren’t supposed to do,” White says. “Namely you have your lead character talk to the camera. And he does so with great dramatic effect because it’s part of his character that he’s got this insightful way of looking at his own situation.”

The gospels, White says, are not historical documents detailing what really happened. They’re more like movies that are based to some extent on a true story. The authors had different things they wanted to get across to different audiences.

There are inconsistencies between the four Gospels of the New Testament and some of those are mutually exclusive.

These differences stemmed from how the authors’ shaped the story for a particular audience and in a particular time and situation.

Both gospels include the scene where Jesus walks on the water of the Sea of Galilee and calms a storm. But the disciples have different reactions.

In Mark, the disciples are portrayed as a bit thick. They are confused or confounded — despite the previous miracles Jesus performed. In Matthew, the reaction is more straightforward. They get it that Jesus is the Son of God and can perform miracles.

In Mark, White says, the author lets the audience know what’s going on before the characters in the story — the disciples — are aware of it.

“In terms of literary ideas this is the definition of dramatic irony where the audience is able to see things that the characters in the story cannot,” White says, and thus it is more like dramatic presentation.

As most biblical scholars would agree, the Gospel of Mark was written for an audience who had been traumatized by contemporary political events, specifically the destruction of Jerusalem in 70 AD. “They’re left wondering, ‘What the hell went wrong?’ They have questions and don’t fully understand,” White says.

“So this portrayal of the original disciples by the Markan author as not understanding says nothing about the ‘real’ situation of the disciples,” he says. “It’s kind of a counseling session to help the ancient audience through their crisis of belief and help them re-orient what they’re doing and thinking.”

But once that situation has changed, later writers find a need to modify the story for new audiences and new circumstances.

White says he hopes to help people — those who are religious and those who aren’t — understand the history behind the gospels.

“It’s part of the broader need for education so everyone can take account of the ancient culture and heritage that we’re discussing, from which much of our own culture has evolved,” he says.

Ultimately, he says, “The question is how can we guard against misuses and misunderstandings regarding the biblical tradition that we’ve seen in the past.”