A group of Army ROTC students set forth on an important mission in early October. They spent an entire day remodeling the home of 107-year-old World War II veteran Richard Overton. 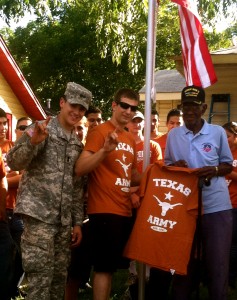 For nearly seven decades, the East Austin house has been Overton’s home since he returned from war in 1945. Though he’s made improvements over the years, the house was in dire need of some major renovations.

But then came an army of volunteers to bring the house back to life. Sixty Army ROTC cadets and several Military Science faculty members joined volunteers from Austin Community College, Home Depot and the City of Austin’s Veterans Services to completely remodel the home. Among the many repairs, they replaced the windows, refrigerator and ceiling fans, landscaped the yard, painted and overhauled the porch.

Army ROTC Cadet Travis Strahan said the one-day home makeover was an incredibly rewarding experience that he will never forget.

“I have always enjoyed working with my hands to create and contribute to the construction of a project, whether that be a fence, landscaping, or painting,” Strahan says. “Having the opportunity to do something like that again whilst helping out one of America’s heroes was truly an awesome experience. From an individual standpoint though, being around and speaking with a man who has experienced more than I could possibly hope to experience in my life was a surreal experience.”

For Army ROTC Cadet Aidan Dietz, the home repair project gave her the unique opportunity to give back to an important cause. 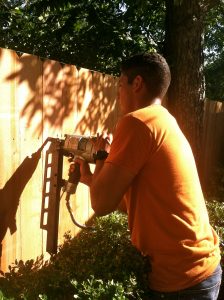 “I decided to be a part of this amazing opportunity because it allowed me to be part of something bigger,” Dietz says. “We worked as a team to help out someone that needed it within our community. This was truly one of the grandest opportunities that someone could be honored with. I am humbled by the fact that I was able to witness history, and spend priceless time with a true American hero who is still fighting strong today at 107 years old.”

Overton, who is believed to be the country’s oldest living World War II veteran, visited with the volunteers, expressing his gratitude for their hard work. Army ROTC Cadet Megan Wenning said she was honored to meet Overton and help him live comfortably in his own home.

“I have always enjoyed the art of self-service, and improving the lives of others who have already done so much their nation,” Wenning says. “Working with others who entail the same drive and passion to help people in the community was one of the greatest experiences I have ever been a part of. I am blessed that I was able to work on this project, and give back to Mr. Overton who gave so much for our country.”