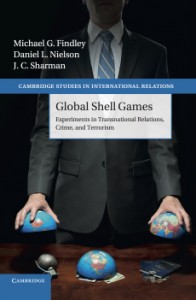 Hit TV series like Breaking Bad demonstrate just how far criminals will go to conceal their piles of dirty money. But of all the countries in the world, these illicit activities are most easily carried out under the guise of shell companies right here in the United States.

A shell company is a business in name only, with no actual employees or products. It exists only on paper and can be set up within a matter of hours. They are the global getaway cars for criminals involved in money laundering, bribery, tax evasion, drug trafficking, and perhaps even terrorism, says Michael Findley, assistant professor of government.

To see just how far they could go to secure an untraceable shell company, Findley and his research team impersonated a range of criminals – from money launderers to terrorist financiers to drug traffickers. They made thousands of email solicitations to nearly 4,000 services in more than 180 countries around the world. Despite the glaring red flags signaling potential security threats, they were able to secure approval to set up untraceable shell companies online for as little as a few hundred dollars.

“On the whole, forming an anonymous shell company is as easy as ever in the United States, despite supposed increased attention following 9/11,” says Findley, who focuses much of his research on terrorism and counterterrorism.  “The results are disconcerting and demonstrate that we are much too far from a world that is safe from crime and terror.”

International laws mandate shell providers to require notarized photo identification from clients. Yet the researchers found almost half of the firms they solicited failed to ask for proper identification—and one fifth did not want any photo ID at all. The grim results are detailed in the authors’ new book, Global Shell Games: Experiments in Transnational Relations, Crime and Terrorism.   Findley conducted the investigations with his co-authors Daniel Nielson, of Brigham Young University; Jason Sharman, of Griffith University; and their team of research assistants.

Among the top offenders is the United States. The findings show that Delaware, Nevada, Montana and Wyoming are some of the easiest places in the world to score an illicit shell operation. In fact, classic tax havens like the Cayman Islands and Jersey are much more compliant with transparency rules than the rich, powerful countries.

While shopping around the United States for anonymous shell companies, the researchers were able to seal the deal in less than three hours after trying about a dozen approaches. However, in so-called tax havens, it took more than double the time and effort.

Enforcement is not especially expensive, given that even tiny tax havens and developing countries are able to apply international standards on corporate transparency, The problem, Findley says, boils down to necessity.

“Tax havens have tightened up the standards much more vigorously than other places, partly because they have to,” Findley says. “They have to protect their incorporation industries and make sure they don’t fall out of favor in the international community. By tightening up their standards, perhaps by necessity, they make it possible to have this good business-operating environment.”

To fix the problem, Findley says shell company providers need to require proper ID from their clients, especially foreigners. But most importantly, regulators need to follow up with providers to make sure they’re up to code. Random audits requiring the information on the actual owners of shell corporations would not cost much and appear to make the difference for the most law-abiding countries. The laws need to be enforced at the international, national and state levels, Findley notes.

Until the United States and other countries in the elite Organisation for Economic Co-operation and Development (OECD) start playing by the rules, corruption will continue to run rampant all over the world.  Organized crime will flourish, drug cartels will run smoothly, and corrupt officials will live the life of luxury on stolen money, Findley says.

For example, former Ukrainian president Viktor Yanukovych owned a presidential palace, a private zoo, a vintage car collection and many other luxuries thanks in part to anonymous shell companies, Findley says.

“I would like to see this type of leader go away,” Findley says. “What we have found here is not a silver bullet solution, but it is a very important part of the puzzle. Money drives corruption. If we could understand the money laundering process and take steps to track the real people in control of shell companies, it would be much more difficult for organized criminals and possibly terrorists to carry out their nefarious activities.”

Go to this website for more about the book: www.globalshellgames.com