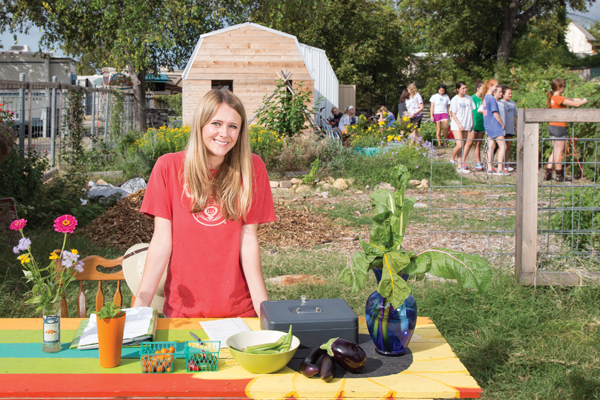 Government Professor Bartholomew “Bat” Sparrow first got the idea to teach a class about food from his wife, who had worked at Whole Foods for eight years. The result was an undergraduate course—“The Politics of Food in America”—that uses food as a lens through which to view the entire U.S. political system.

“The idea was to take a topic like food, that everyone can relate to, to look at public policy, and to investigate the different ways our political system routinely and systematically affects the choices we have as consumers on public health, ecological and environmental issues,” Sparrow says.

The course, launched in 2007, covers the fast-food industry, genetically modified foods, food trade, and the movement toward organic food and local eating. It also explores major features of the food system including government policies in areas such as trade, patents, subsidies and hunger. 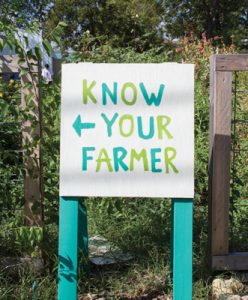 “Know Your Farmer” signage located at the UT Micro Farm, the first student-run farm on campus.

Sparrow developed an early awareness about food and nutrition during his childhood in Annapolis, Maryland.

“My mother was kind of an organic food nut,” he laughs. “She had read Adelle Davis, whose basic line is ‘health through eating’ and ‘you are what you eat.’ When we were kids we never had sodas, she always baked her own bread, she’d shop at health food stores before there were all of these alternative sites.

“We kind of took that for granted, but missed the things that our neighbors and friends were having like Nilla wafers, watching television, and drinking Cokes, so we would take advantage of that when we were at our friends’ houses.”

It was during his college years that Sparrow began to realize that his good health was to a large extent due to his mother’s attention to nutrition.

Sparrow says his students today are coming to class more aware about food systems, and many have already established some type of position or philosophy in respect to food.

“I have vegans, vegetarians, people who will shop farmers markets as much as they can given the time and budgetary constraints that students have,” Sparrow says. “You certainly see this in the UT cafeteria system. They have programs to buy locally.” 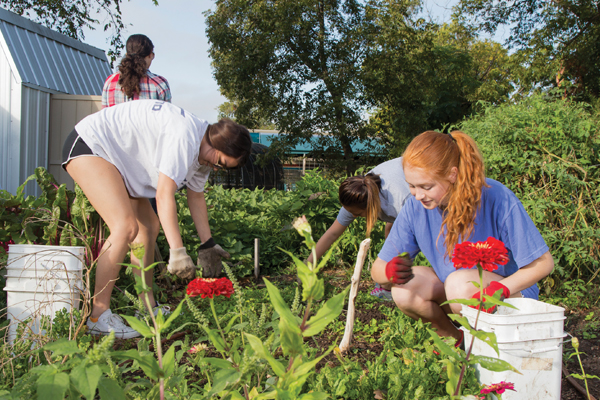 The university also grows its own produce in two campus gardens. Mangrum is particularly proud of these student-run operations, which are irrigated by captured rainwater and solar-powered pumps. Students grow the produce, harvest it, work with UT chefs to prepare it, and serve it in the dining halls. Another student-run garden, UT Micro Farm, also supplies fresh produce to the dining halls.

“Each semester we host a Harvest Meal highlighting local, sustainable and organic foods,” Mangrum says. “One hundred percent of what we serve at those meals falls into one of those three categories, and for many items all three are met. We incorporate interactive education on these days to connect students with what they are eating and where it came from.”

An important part of Sparrow’s class is giving students the opportunity to research the origins of their food. One of Kimberly Chiu’s most memorable experiences was keeping a food log. For 48 hours, Chiu and her fellow students recorded what they ate and then further examined 10 of those foods to determine their exact ingredients and their origins.

“The food tracking process was extremely intricate and eye opening,” says Chiu, a French senior. “I was able to find a ton of information that we as consumers normally never bother to think about.”

For example, she explored the concept of food miles (the distance a product travels from farm to consumer), parent companies of each product, the source of each listed ingredient, and the certifications behind them (e.g. Fair Trade, USDA Organic).

“It made me an even more conscientious consumer regarding food products, knowing how unnecessarily far many items travel just to make it to my plate, or just how concealed the supply chain information actually is,” Chiu says. “We all had a difficult time with 100 percent transparency throughout our tracking processes.”

Prior to the food tracking exercise, Sparrow says that “easily 80 percent” of the students weren’t aware of how the food system routinely affects their day-to-day lives.

“It’s an interesting exercise for them,” he says. “They have to analyze and interpret the data they have in terms of what they’ve learned from the class. In this way they get a sense of how the food system affects them personally.”

For Chiu, taking the class led to a personal decision to reduce her meat intake in an effort to minimize her own carbon footprint. She says she was surprised to learn that a substantial amount of the world’s greenhouse gases are emitted by meat production.

The Cost of Food

This year, Sparrow’s students are organized into research teams that examine food challenges, such as product labels, and then asked to offer possible solutions.

Sparrow hopes food issues will gain immediacy with students and that they will consider how food issues are affected by Congress, by different companies and lobbying groups, and by the executive branch, federal regulators, and the courts.

“I want them to understand where we are today and how we got here,” Sparrow says. “We look where we are going and what is down the road.”

Part of understanding the food system is knowing how food is produced, and the costs that are not always accounted for in the price of food. 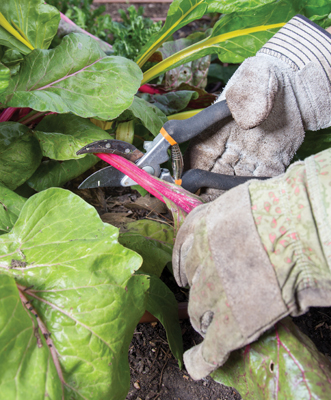 Sparrow gives the example of a pig farm. The unaccounted costs of a pig farm might include the creation of great manure lagoons that could potentially contaminate the ground water and emit smells that affect neighbors. There might also be questions about the ethical and humane treatment of the animals.

Certain kinds of calories are also cheaper and may result in people being overweight and obese— particularly when there is an option to “supersize” a meal. It is relatively inexpensive to buy a hamburger and French fries. But what is the health cost over the long term? Sparrow says externalities such as a person’s extra weight gain are rarely factored into the overall pricing system.

The sustainability of resources such as water and land are also major cost factors, whether it is aquifer depletion, agricultural chemicals affecting water quality, or the decrease in arable land caused by urban sprawl and growing populations.

Over the years, Sparrow has added to and revised the food course. He says it is both terrific and a little daunting to see the increase in the amount of writing on food since he first started teaching the course. While the topic of food may be something that everyone can relate to, the academic approach offers a more disciplined and rigorous look at the subject through the lens of political science.

Most of the work is interdisciplinary, so there are many different perspectives by which to view the issue. In addition to political science, food issues bring together experts from such fields as nutrition, economics, sociology, American studies, geography, and journalism.

“What keeps the course interesting for me is that I have to figure out the best of the new work for my students to read,” Sparrow says. “How do I want them to engage the material in a way that allows them to sink their teeth into the matter, so to speak?”

“I think anyone and everyone can benefit from taking a course like this,” Chiu says. “It’s a topic that touches every individual since food is both a necessity and a consumer luxury, and I firmly believe in the importance of learning how to responsibly navigate our consumer-driven society.

“Consumers have way more power than most people realize, and each of us essentially votes with our wallets and where we decide to allow our dollars to flow,” she adds.

Feature image: Molly Mandell, an American studies and photojournalism senior, sells produce at the UT Micro Farm Oct. 18. In the background, Katie Lewis, biology sophomore and farm manager, demonstrates how to harvest the okra for a group of volunteers. 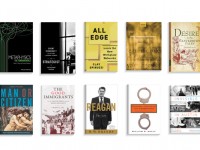