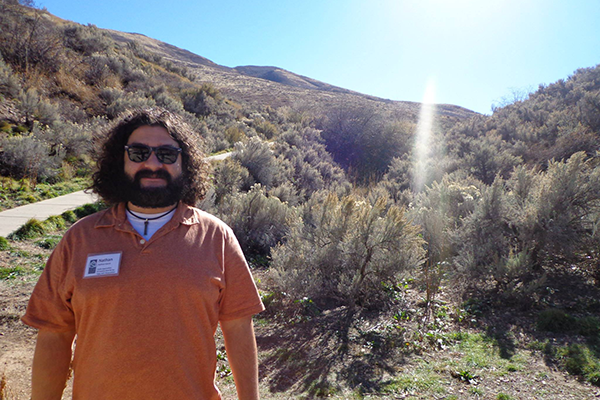 As a kid growing up in San Antonio, Nathan Garza spent a lot of time hiking trails. 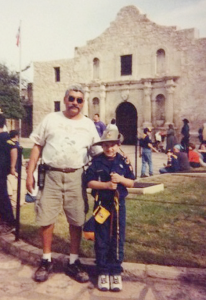 Garza and his dad in front of the Alamo after one of the Mission Trail Hikes.

His home Boy Scout troop organized and led the Mission Trail Hike for years. Scouts from all over San Antonio and the surrounding areas would gather at Mission Espada and begin their two-day hike to the Alamo. At the end of his first trip, Garza was rewarded with the Mission Trail Hike patch. Little did he know that years later he would become even more familiar with their paths.

“It blew my mind when I found out that the missions in San Antonio were along a stretch of El Camino Real,” says Garza. “I had come full circle, from being on the trail as a scout and learning about the history to now doing GIS mapping of the trail as a college student.”

Garza, a senior majoring in geography, is a GIS intern for El Camino Real de los Tejas, a member of the National Historic Trail Association. The trails were originally trade routes from Mexico City, and stretch across the state of Texas and into Louisiana.

So what exactly is GIS?

It stands for Geographic Information Systems, which are a series of layers of data that help people visualize and analyze different types of information and trends. Geomorphologists can use GIS data to study things like a river’s effect on a landscape, while demographers can use other GIS data to see who lives where and predict voting preferences in certain districts. Basically, GIS can be used by a wide variety of people for a wide variety of purposes, Garza says.

Another big influence in Garza’s life is art. When he was younger, it was hard to find him without a pen and paper, sketching anything in his line of sight. He was fascinated by old maps and cartography.

“When I realized I could make digital maps for all sorts of purposes, it seemed to be the best of both worlds,” Garza says. “I could make sort of ‘utilitarian art’ that I would be proud to display, while others could use them functionally as maps.”

Garza first learned about El Camino Real through his advisor in the geography department. The idea of working for a national historic trail appealed to his roots as a boy scout, so he dug deeper.

After receiving Garza’s resume and a letter of interest last June, Steven Gonzales, the executive director of El Camino Real, called him to set up an interview. The two quickly discovered they had a lot in common, and Gonzales recognized that Garza would be a good fit for the organization. He offered him the internship, and Garza began work in their office just north of campus later that month. 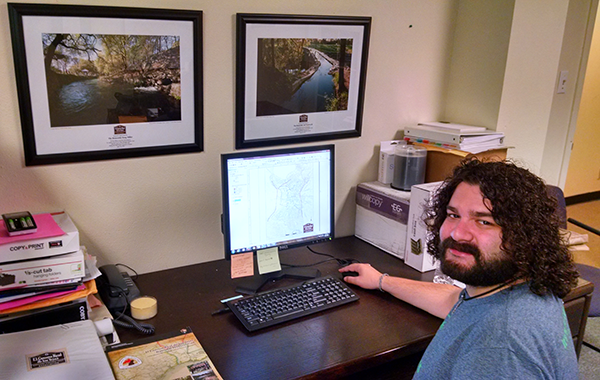 Garza at his desk at the El Camino Real office.

Garza spent most of his time last summer creating county maps showing the location of the trail. His maps also showcase trail markers placed by the Daughters of the American Revolution (DAR) in 1918.

“The DAR markers serve as the visual symbol for the trail on the ground,” Garza says. “I was able to make a map series you could use to get from marker to marker starting near Eagle Pass, Texas, and wrapping up just east of San Augustine, Texas, and into Louisiana.” 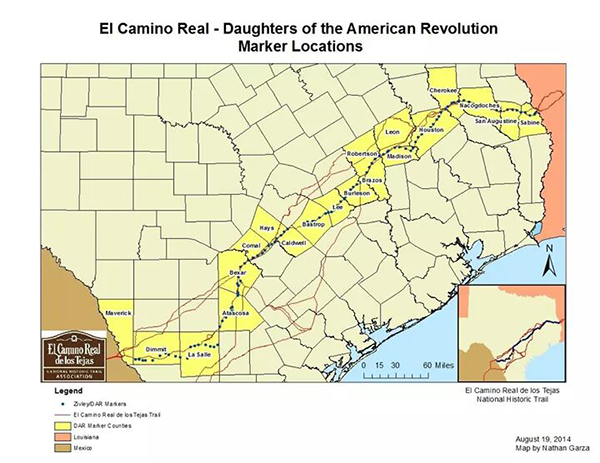 Garza is continuing his internship this semester, and spends around 10 hours per week working in the El Camino Real office. Lately, he’s been working on georeferencing historic hand-drawn maps. Garza pins known markers, such as a mission church or a meeting of two rivers, to their actual geographic coordinates, which stretches and corrects the hand-drawn maps to scale. 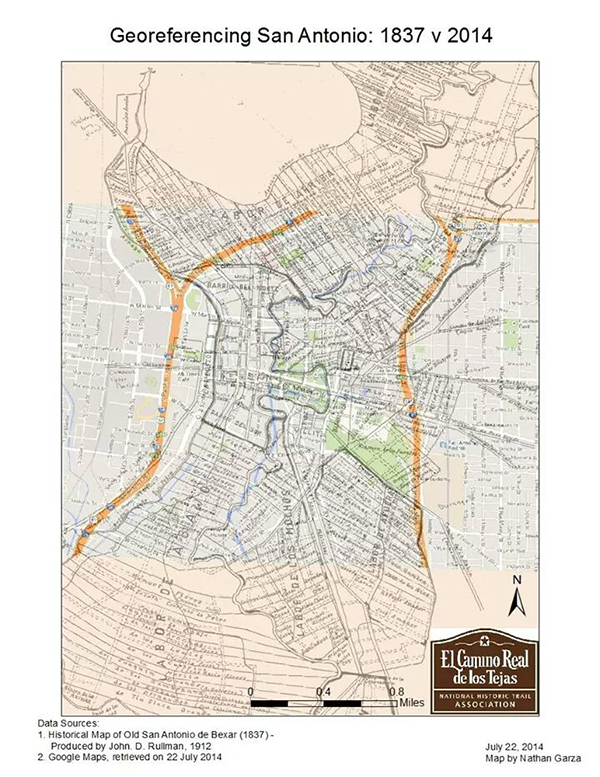 Garza’s georeferenced map of San Antonio. The historic map was drawn in the 1830s and is superimposed with a Google Map image to compare their similarities. Garza notes that “the important roads from back then are still important now, but of course today it is a lot busier.”

In addition to his GIS duties, Garza also helps out with administrative tasks like managing sales of the organization’s new book, which features some of his own maps. He also helped plan this year’s annual board meeting and the 10th anniversary celebration of the trail’s NHT distinction. The meeting included updates for board members about El Camino Real’s recent activities, as well as a daylong bus tour in San Antonio that covered the trail’s historic Spanish Missions and gave their history. They visited the same Missions Garza hiked by and learned about as a boy scout. 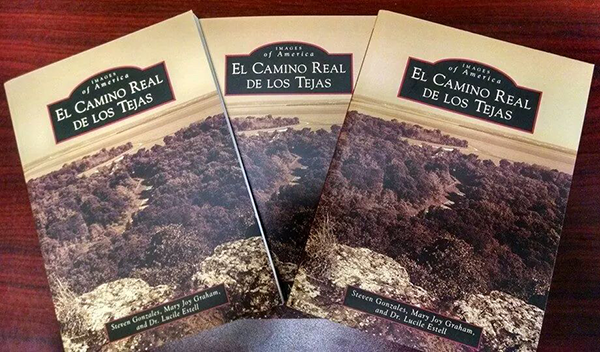 The new book published by El Camino Real de los Tejas, which features some of Garza’s maps. It is available for purchase on Amazon.

In late October, Garza traveled to Salt Lake City for the 2014 Partnership for the National Trails System Workshop, a gathering of 70 PNTS professionals from around the country. He was one of just eight interns to attend.

“That was definitely the highlight of my semester and time with El Camino Real,” he says. 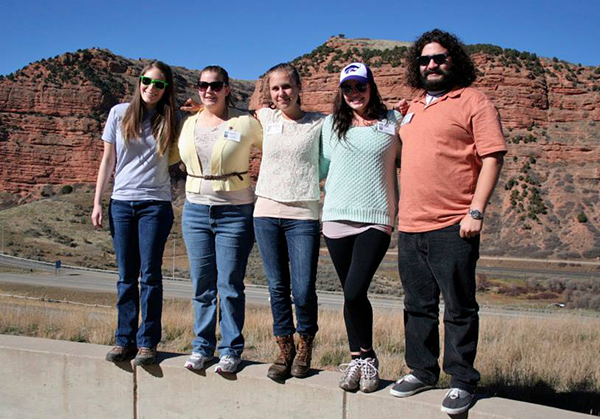 Garza poses with some of the other National Historic Trails interns at the workshop in Utah.

Garza spent a week in Salt Lake City, where he learned about the Mormon Trails and went into the Great Salt Desert, where the Donner-Reed party traveled on their journey across the Hastings Cutoff. 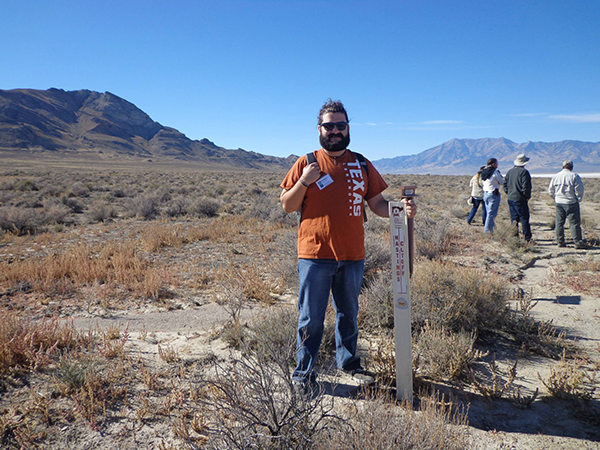 Garza at one of the Hastings Cutoff trail markers. On the right is Pilot Peak, where the Donner-Reed Party finally found a spring after miles of crossing the salt flats without water.

Above: Interns from the Bureau of Land Management – Utah retrace the treacherous journey of the Donner-Reed Party across the Hastings Cutoff. The video was created to bring more attention back to their experience, and was shown at the workshop.

In addition to being “on the ground” in these locations and learning about the history of the area, Garza also had the chance to meet and learn from professionals in the field from around the country. He also spoke on a panel with other interns, where they answered questions about how to get youth more involved with national trails and the preservation of these amazing lands. 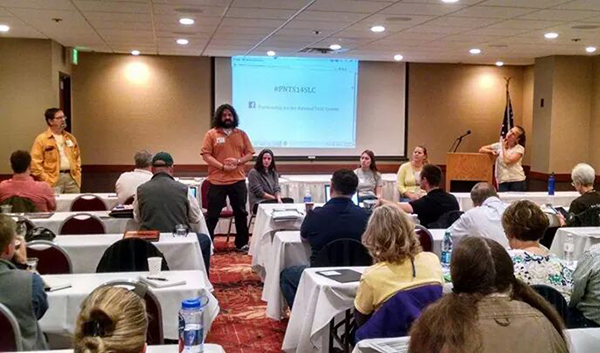 Garza speaking on a panel with other interns at the PNTS Workshop.

Garza’s internship has helped him to solidify his future plans and recognize a lifelong passion.

“Working with El Camino Real has taught me that it’s a lot of work running a nonprofit,” Garza says. “It’s also interesting to see people from all walks of life come together for the betterment of history and local culture. It has definitely shown me I want to go into this line of work—I’d like to be able to say I help preserve our cultural history while working with communities all over the state.”

For more information about El Camino Real de los Tejas or to become a member and help support the cause, visit their website or like their Facebook page.

This week is Geography Awareness Week, and UT Austin’s Geography Society (on which Garza served as vice president last year) is a great resource for students who may be interested in the field, as a profession or a hobby. The group brings in speakers, plans camping trips and hosts volunteer opportunities throughout the year. Visit their Facebook page for more information.