A Q&A with English Alumna Ashley Hope Pérez, Author of ‘Out of Darkness’ 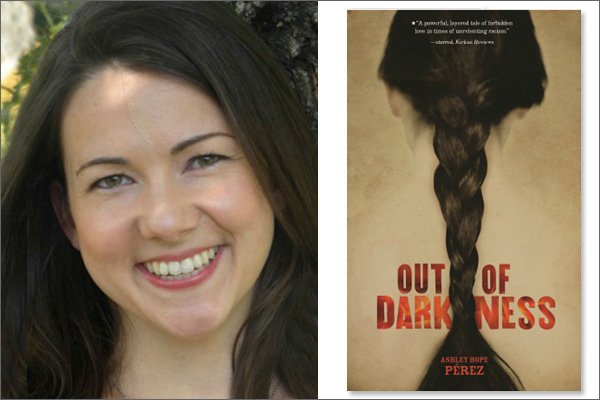 In March 1937 a gas leak caused a massive explosion that killed almost 300 children and teachers at a school in New London, Texas. Amidst the backdrop of this catastrophic event, a Mexican-American girl falls in love with a Black boy in a segregated oil town.

In a town where store signs mandate “No Negroes, Mexicans, or dogs,” Naomi Vargas and Wash Fuller know not to cross the deeply entrenched color lines. Yet the heart wants what it wants and societal barriers are no match for young love.

Like a ticking time bomb, the tension builds as their love blossoms. And when tragedy strikes, the young lovers struggle to find a shred of light amidst the shroud of darkness. Will they overcome the forces of hate and intolerance that loom over their town, their school—even their own homes? You’ll have to read the book to find out! Out of Darkness hits shelves Sept. 1, 2015.

The author Ashley Hope Pérez—who just so happens to be a proud Longhorn—was kind enough to share some insight into this multifaceted tale of love, loss, family and the ugly forces that drive people apart. Read on to learn more about the book—and how many of the themes touch on issues we face today in American society.

What made you decide to write a story about the 1937 New London school explosion?

I grew up about 20 minutes from New London. The explosion—which happened at 3:17 on March 18, 1937—was always a kind of shadowy event that I’d hear whispered about from time to time but rarely discussed openly. At one point, I remember driving by the site of the disaster with my father and him telling me the story of a little girl who could only be identified because she had colored her toenails with a crayon. I didn’t know many specifics of the explosion, only that it had killed hundreds of children. When I returned to the event as a novelist, I was interested in more than the explosion itself: I wanted to examine how this kind of tragedy might ripple through a community, bringing out the best in some and the worst in others and catalyzing more loss.

How can readers relate to the characters in your book?

Okay, first some quick introductions. Four characters are at the heart of the story in Out of Darkness. There’s Wash Fuller.The teenage son of the New London Colored School’s principal, Wash has always lived in East Texas and prides himself on knowing his way around both the woods and the prettiest girls from Egypt Town, where most of the Black community lives. Wash’s days as a womanizer come to an end when he meets Naomi Vargas, a beautiful and painfully shy girl from San Antonio who has just moved to New London with her younger twin half-siblings, Beto and Cari (short for Roberto and Caridad). The three of them have been brought to East Texas by Naomi’s white stepfather after he has a conversion experience and decides he ought to bring his family back together.

Wash is easy for readers to relate to; he’s funny, loyal and passionate. Naomi is a quieter character, but readers quickly identify with her determination to protect the twins and her ability to persevere in spite of considerable hardship in the present and secrets from her past. Once Wash and Naomi fall in love, it would be impossible not to want them to have a future together. Romantic love intertwines with the love both Naomi and Wash feel for the twins, who also play an important part in the story. Some of the most beautiful parts of the book are when the four of them are together in the woods of East Texas.

What do you hope readers will take away from Out of Darkness?

I hope that readers will admire Naomi and Wash for their efforts to seize some joy for themselves at a time when the happiness and well-being of brown people was of little importance to most of American society. I hope that the barriers and flat-out cruelty that Naomi and Wash encounter in the world of 1937 may galvanize readers’ commitment to supporting people’s right to love whomever they love and build families around that love. That’s what Naomi and Wash try to do for the twins—make a family together in the secret still places along the Sabine River.

Are there any themes in Out of Darkness that are relevant to current issues in our society?

One of the most problematic views of racism is that it is “a thing of the past.” Out of Darkness shows racism and prejudice in the past, but it also creates opportunities to recognize the distressing continuities between our history and the present. We continue to see racialized violence in the news, both hate crimes like the church shooting in Charleston and acts of brutality by police and others that underscore disparities in how different members of our community are treated. This injustice and the distrust it breeds have deep roots. Out of Darkness asks readers to reckon with some of those roots as they existed here in Texas.

Beyond the blatant discrimination and violent expressions of white supremacy that unfold in the characters’ experiences, the novel offers glimpses of systematic discrimination, as in the tripartite segregation of schools into white, “colored,” and “Mexican” in cities like San Antonio. I taught for three years in an inner-city school in Houston, and I can tell you that the consequences of that segregation and the disenfranchisement it produced are still being felt in African American and Latino communities.

What are you working on now?

A new novel, this time exploring Latino experiences in the Midwest. (Although born a Texan, I’ve been in the Midwest for nearly a decade, and apparently that’s about how long it takes for a new place to show up in my fiction.) The new book also involves family and tragedy, but that’s about all I can say about it at this point because I’m wildly superstitious about discussing details of work in progress.

Just that I hope Texans will not be scared off by some of the difficult issues in the novel and that they will instead embrace the chance to dive into our history in the company of characters worthy of their love and attention. Some people have suggested that Out of Darkness is a “brave” book, but I think it’s equally important to acknowledge that reading about painful features of our past takes courage.

And, of course, a big thank you for the chance to share a bit about Out of Darkness with Longhorn readers. Many of my formative reading and writing experiences took place right on the UT campus between the wonderfully deteriorated walls of Parlin Hall. So… Hook ‘em!

About the author: In addition to Out of Darkness, Ashley Hope Pérez is the author of the YA novels The Knife and the Butterfly, and What Can’t Wait. She grew up in Texas and taught high school in Houston before pursuing a Ph.D. in comparative literature. She is now a visiting assistant professor of comparative studies at The Ohio State University and spends most of her time reading, writing and teaching on topics from global youth narratives to Latin American and Latina/o fiction. She lives in Ohio with her husband, Arnulfo, and their son, Liam Miguel.