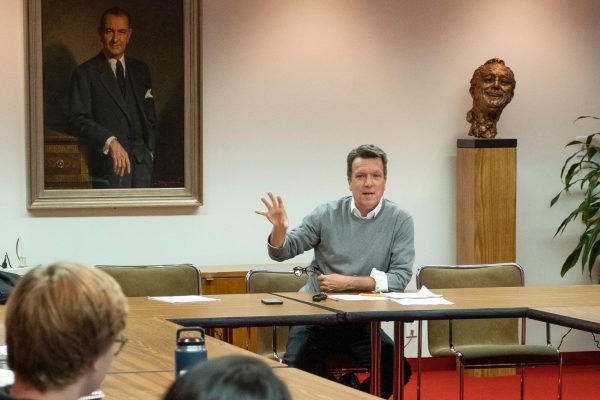 One evening, LBJ decided on a whim that he wanted to attend a party held at the Forty Acres Club, Lawrence explains: “The problem was that the club was segregated and some of LBJ’s aides worried that he would mire his presidency in controversy if he went there.”

“But Johnson had other ideas. He deliberately walked into the club arm-in-arm with one of his secretaries, an African-American woman named Gerri Whittington,” says Lawrence. “From that day onward, the Forty Acres Club was desegregated.”

Lawrence’s admiration for LBJ is rooted in both the President’s charisma, as well as his commitment to social justice, and he hopes his enthusiasm for that history reverberates in his role as the new director of the LBJ Presidential Library, beginning in January 2020.

“For the past several years, the focus has rightly fallen on the fiftieth anniversaries of key moments from the Johnson presidency,” says Lawrence. “Major events marked, for example, the 1964 Civil Rights Act and the Vietnam War. Now, the challenge is to keep the Library vital for the next half-century.”

As director, Lawrence wants to ensure that the library is engaging to younger generations. He hopes to bolster programs and exhibits on former President Johnson’s role and view them through the lens of today’s rapidly changing and divisive social and political climate.

Lawrence has had extensive involvement with the library since he began teaching at UT, whether it be sitting on a faculty committee, organizing conferences in the LBJ Library or advising the award of grants to support archival research. Since 2015, Lawrence has taught a course called “The Johnson Years” to Liberal Arts Honors students at the library. The class is geared towards promoting research using the library’s own archives.

“I can speak first-hand to Mark’s superlative ability to connect with students and his vast knowledge of President Johnson and the times during which he served in the White House,” says Mark Updegrove, President and CEO of the LBJ Foundation who has co-taught The Johnson Years.

Currently, Lawrence is finishing a book, titled “In the Shadow of Vietnam: The United States and the Third World in the 1960s.” In it, he discusses how the war influenced U.S. foreign policy and decision-making in the following years. Much of the research for this book, as well as for many of his other studies, stems from the LBJ Library’s extensive archives.

“I’m thrilled by the opportunity to lead the LBJ Presidential Library, a unique treasure for the Austin community and the nation as a whole,” says Lawrence.