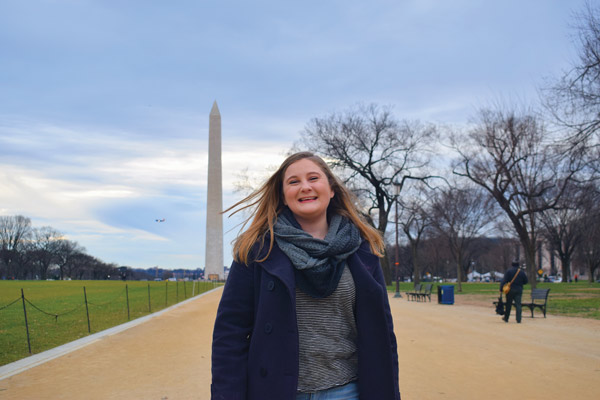 Government and humanities senior Alyssa Ashcraft received one of the country’s premier graduate awards, which she will use to pursue a dual degree in law and public policy.

As a 2019 Truman scholar, Ashcraft received $30,000 toward graduate school and the opportunity to participate in professional development programming to help prepare for a career in public service leadership.

“Being a Truman scholar increases my capacity to make meaningful, impactful change in the world of education advocacy, and it will support me professionally and financially as I pursue my graduate education,” Ashcraft says. “I will be part of a community of leaders who are dedicated to combating the world’s most complicated problems. I want to be a part of a movement to create better educational institutions, ones that fight inequity and promote economic mobility.”

“I want to be a part of a movement to create better educational institutions, ones that fight inequity and promote economic mobility.”

Ashcraft was inspired to advocate for education equity as the daughter of two public school teachers. As a freshman, she founded the Campus Closet and obtained funding from the Office of the Dean of Students to provide professional clothing to low-income students. Now named UT Outpost, it has become a permanent campus resource, expanding to include a food pantry to address food insecurity. UT Outpost has served more than 500 undergraduates so far.

Ashcraft was one of 62 Truman scholars named this year, selected from 840 candidates nominated by 346 colleges and universities, a record number of both applications and institutions. Since the program was established by Congress as the nation’s living memorial to President Harry S. Truman in 1975, 22 UT Austin students have been named Truman scholars.