As universities increasingly explore the educational value of digital environments such as the blogosphere, Google maps or Second Life, students and faculty are working to understand what it means to learn in new ways.

“Before I typed something, I needed to ask myself ‘Is this something LBJ would say?’”

A traditional textbook-based education has students master the often solitary task of writing papers based on research alone.

It’s hard to ignore, however, the impact of social media on communication and business. So, as more companies seek workers with experience in various digital environments, universities must wrestle with the question of whether it’s more important to teach students how to use the new media than to stick to conventional methods of teaching.

The Digital Writing and Research Lab (DWRL) at The University of Texas at Austin, as well as other research teams around the university, seeks to answer this question by exploring both the academic and real-world application of digital environments for teachers, students and society.

“It’s different than the content-delivery model most people have of education: where you go to school, get plugged with information, leave college with a lot of knowledge and then go do something with it,” says Sean McCarthy, a graduate student and assistant director of the DWRL.

“If we can get out of book thinking — it can all be contained in here — and more into network thinking — where I’ve got a better chance of getting this job done if we collaborate — then we’ve changed the parameters of what learning means,” says McCarthy.

To accomplish that, students in Rhetoric and Writing 312: Writing in Digital Environments have begun using Second Life, an online virtual world launched by Linden Lab, to explore and work together inside of what, for many, is a new technology.

“For anyone who doubts the pedagogical possibilities of a space like Second Life,” says assistant instructor Matt King, “it’s important to remember the limitations of more traditional teaching resources. Textbooks are not the best tools for helping students work collaboratively. Lectures are not the best way to inspire student creativity.” 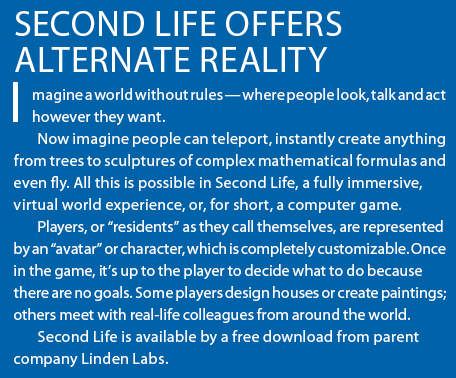 By venturing into this alternative reality, students are presented with an unfamiliar, online environment in which they must form groups and use and design the new space to complete the class assignments. In this case, they are in the fictional town of Rhetorical Peaks (based on the 1990s television show “Twin Peaks”) and must find a way to restore the town’s sense of trust after a mysterious murder.

University researchers have observed King’s class both in person and in Second Life. They are analyzing the data they collected and are developing a set of findings about the usefulness of Second Life as an educational tool. Lead researcher and graduate student Lauren Mitchell says she was surprised that not many students had prior experience in Second Life.

Thus, the students must learn to navigate Second Life before they can have an impact.

In one class this spring, the students devoted an hour to learning how to make their avatars — or characters they played in the game — walk, talk and eventually ﬂy. As one student related, not all college students have logged the hours required to form calloused ﬁngers.

“I hardly played video games growing up. My friends and I, we played baseball,” says jazz performance senior David Sierra.

Once they could successfully manipulate their avatars, students learned how to adapt their alter-egos’ appearance by downloading free clothing, accessories and even houses. With identities in place, students then role-played as their avatars.

“My avatar was a natural born leader, an articulate man and extremely intelligent — a person who eventually became President of the United States. Before I typed something, I needed to ask myself ‘Is this something LBJ would say?’” says Catherine Tashjian.

While designing her avatar, Tashjian ran into a complication. “I accidentally turned LBJ’s arm into a picture frame. But when he flies, at least he has one wing,” she said.

Professors in the DWRL say the game has a unique educational value.

“Students developed more general rhetoric and writing skills,” King says. “For example, the challenge of locating free objects within Second Life and using these to create a memorial, a task the students decided on their own, is somewhat akin to researching for a paper. Both activities ask students to ﬁnd available resources and to communicate something by assembling them according to the rules of Second Life.”

“If we can get out of book thinking and more into network thinking then we’ve changed the parameters of what learning means.”

“Part of the goal here is to recognize the ways in which attitudes, action, and uses of language are already structured to some extent.” says King. “Yet these frames can change, and any given situation can be accounted for and described by more than one frame or perspective. Our use of Second Life confronts students with this situation, asking them to reﬂect on the frames that they bring to a particular situation and the implications of these frames.”

King also acknowledges the limitations of Second Life. “If this was all we were doing,” he says, “I’d be worried.”

Using other digital environments enhanced much of the class work in Second Life. Before entering the game, the students created a blog to present their avatar’s values, beliefs and how they might act inside of Second Life. While creating the blogs, the students practiced writing a form of rhetorical analysis that could include graphics or video as well.

“Students are given goals but not a lot for structure,” says King. “They then must ﬁgure out for themselves how to accomplish the goal.”

Developing this ability to comfortably explore the unknown might turn out to be the most applicable skill for the knowledge-based workforce of tomorrow.

“The futures our students will ﬁnd themselves in will demand many things of them, and many of these demands will present themselves through and in relation to digital technologies and environments. Students who can write, communicate, create, and collaborate in these spaces and think with the technology will be better prepared to meet such demands,” says King.