Recovering a forgotten history of African American life was motivation enough for anthropology graduate student Nedra Lee and her peers to brave the Texas summer heat while excavating an old farmstead in southern Travis County.

“Working outdoors always brought a few surprises. There were always toads hopping around; a huge bee tree was only a few feet away from the house block; and some of us, myself included, learned the hard way what chiggers were,” says Lee, “But finding cool artifacts contributed to the enthusiasm: the toy guns found at the site almost caused a riot.” 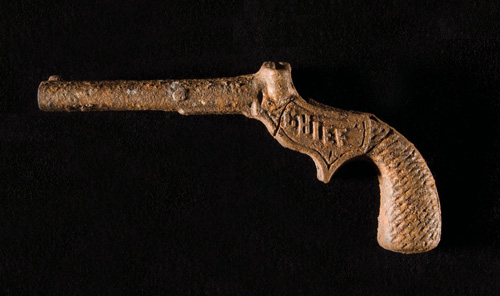 Lee’s advisor, Maria Franklin, an associate professor of anthropology, headed up community outreach and oral history components of the project. Franklin is an expert in African diaspora archaeology, which focuses on the experience of people of African descent around the world. The discipline has its roots in the study of black slavery and has been a popular area of study for historical archaeologists.

“Very little archaeological research of this kind has been done in the Austin area.”

But the experiences of black people after they were freed has not received much attention from archaeologists, Franklin says.

“This was a chance for me to get involved with research on African Americans closer to home,” says Franklin, who had conducted field excavations on historic and prehistoric sites in Virginia, Georgia, Alabama, California and South Africa. “That was important since very little archaeological research of this kind had been done in the Austin area.”

Directed by Doug Boyd, vice president of Prewitt and Associates, Inc., an Austin cultural resource management firm, the Ransom Williams Farmstead Project represents a collaborative effort of the Texas Department of Transportation (TxDOT), local historians and archaeologists, and the Department of Anthropology and the John Warfield Center for African and African American Studies at The University of Texas.

The project is multi-faceted. It includes archival research and oral histories of the descendants of freed slaves as well as the archeological investigation of the site. While the excavation aims to reveal how Texas freedmen lived just after the Civil War, the oral history project is focused on how contemporary African Americans remember and relate their ancestors’ history, from emancipation to the 1960s. 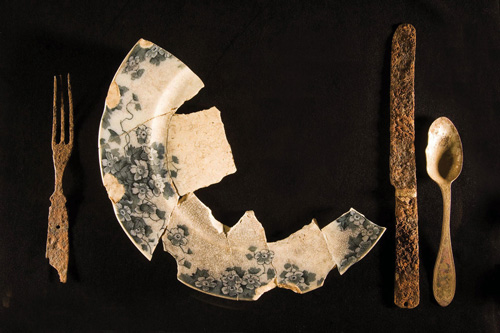 “The items recovered from the site really challenged our conceptions about what the material lives of an African American family following the years of slavery looked like,” says Lee. “And, in some ways it showed us that despite all that has changed over the years, there are some things that stay the same.”

It all started in 2003, when a TxDOT consultant surveying the land intended for the construction of a new highway, Texas 45, near the Travis-Hays County line stumbled upon an old fallen chimney.

Convinced the site was worth further exploration, TxDOT archaeologist Jon Budd hired Austin historian Terri Myers to research the history of the farmstead. Her findings raised the status of the site from interesting to historically significant.

They suggested that the 40-acre site belonged to a black man named Ransom Williams, a rarity for that time period when few African Americans lived outside freedman communities. Hired by TxDOT, Prewitt and Associates, Inc., matched maps from 1871 with modern maps and aerial photographs, to confirm what Myers had suspected.

Boyd wanted to involve the surrounding communities in order to bring life to the project.

Enter Franklin, a faculty member since 1998, who holds a bachelor’s degree in anthropology from Auburn University and a master’s degree and doctorate from the University of California at Berkeley.

Since she was hired by Prewitt/TxDOT last year, Franklin and the rest of the team have learned much about Ransom Williams and even more about African American life in Texas during Reconstruction. 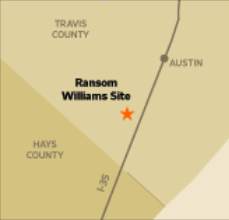 The excavation took place from June to August 2009. Working in dry, persistent heat, the researchers started work every morning by 6:30 with their handpicks and trowels.

They mapped the spots where they found interesting objects or soil features, drew pictures of them by hand and subsequently documented every find in copious notes. Every day was a struggle against the dust, dirt and overgrown brush to uncover just one more piece of the Williams’ past.

Archival records, such as land deeds, maps and tax records, provided the basic story of Ransom and Sarah Williams, an African American couple who bought the farm only six years after the end of the Civil War and one of only two African American families who lived along Bear Creek. And the artifacts discovered on the site brought them to life.

An iron brand was of particular interest to the archaeologists, since preliminary research had revealed that Ransom Williams had registered a livestock brand with Travis County in 1872. 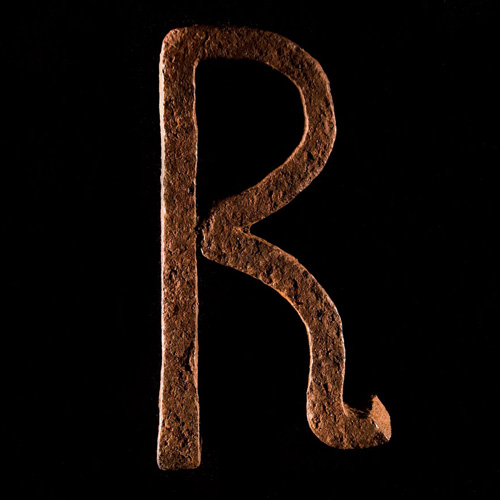 His brand was the script letters “RA” and it had a notation that it was a “horse brand” rather than a cattle brand. Ransom’s tax records also indicated that he had many more horses than all of his surrounding neighbors, black or white. The team speculated that Ransom might have been a horse trainer as a slave and then used this skill to raise enough money to buy his land so soon after emancipation.

The team also discovered small graphite pencils and slate that helped tell the family’s story. From 1871 until 1901, when they lived on the farmstead, Ransom and Sarah had nine children, five of whom lived to adulthood, each of them literate.

“I think the pencils and pieces of slate found at the site are also compelling because it shows the importance of learning to African Americans who were denied access to education during slavery and even after they were freed,” Lee says.

Antioch and the Oral History

“The items recovered from the site really challenged our conceptions about what the material lives of an African American family following the years of slavery looked like.”

The closest black school was in Antioch Colony, approximately four miles away from the farmstead in Manchaca, Texas. In the early 1870s, the Antioch Colony had started with about a dozen black families. They were men and women looking for a place to settle down, raise children and plant roots somewhere they could call their own.

At the close of the Civil War, there were an estimated 182,000 freed slaves in Texas alone. With no concrete policy issued by Washington concerning their welfare, freedmen faced uncertain futures and confrontations with field commanders who had been saddled with caring for them.

Many freedmen were herded into contraband camps and then hired out to loyal Unionist plantation owners for low wages. Others in the Western theater were assigned plots of confiscated lands for subsistence farming. Still others joined the army.

Freedmen communities were, to some degree, anomalies in post-war Texas where white power elites rapidly resumed control, and the agricultural system of sharecropping came to dominate. Only 1.8 percent of African Americans in Texas owned land in 1870, according to Thad Sitton and James H. Conrad’s book “Freedom Colonies: Independent Black Texans in the Time of Jim Crow.”

In spite of all of the obstacles, however, Antioch Colony was established.

Realizing that Ransom Williams and his family were most likely to associate themselves with this community, Franklin focused heavily on the area’s descendants for the oral history. She found one of the Williams family’s closest living descendants, LeeDell Bunton, the great nephew of Sarah or Ransom Williams’ cousin, who has since become very involved in the project.

“I saw it as an opportunity to be involved with archeological and other researchers who could possibly help me with my quest in researching my ancestors in the historic Antioch Colony,” says Bunton, a retired sales engineer who spent his youth in Antioch before moving to Arizona where he lives today. An avid genealogist, Bunton, whom Franklin calls the “Antioch archivist,” makes a point of staying connected with his hometown, which today only includes an estimated 40 to 50 descendants from the original black settlers.

“We can’t simply pretend that we’re the only ones interested in the past, or that we are the sole authorities on it.” Franklin says, recognizing that archaeology is very much dependent on local support. “And that can’t happen if they have no idea what we’re doing in their own backyards.”

Those backyards are small by modern standards. Antioch still has a rural feel to it, with people keeping chickens and raising vegetable gardens. But the landscape is changing rapidly as chicken coops give way to subdivisions.

Through the oral history project, Franklin hoped to record the memories of Antioch and Manchaca descendants, some of them still local residents, before they disappear completely. She collected the testimonies of 19 men and women with firsthand knowledge of what life was like for both white and black families in rural Texas, and through these interviews, the research team was better able to understand the historical context of the Ransom Williams Farmstead site. 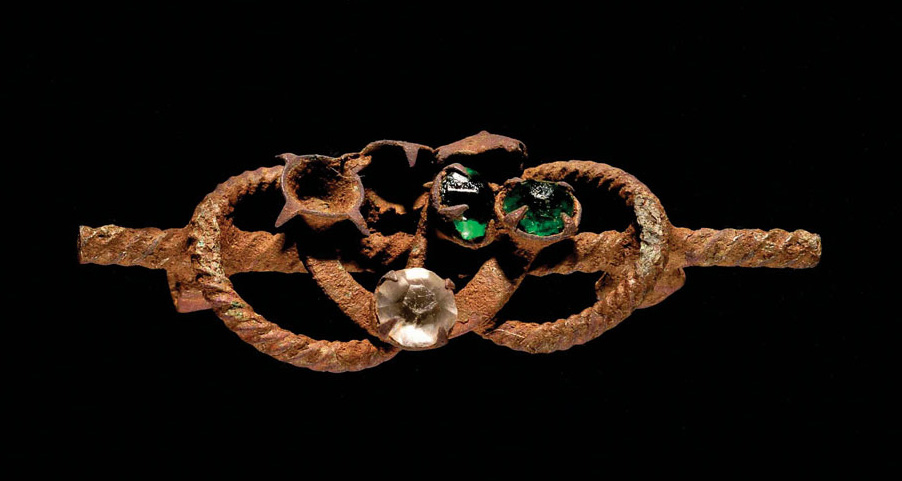 During the audiotaped interviews, Franklin told interviewees about the history of the farmstead as she asked about their childhood memories of the area.

She also invited them to the site so they could see what was happening, ask questions and understand that their memories were relevant to the excavations. All of the descendants who visited the site were willing to provide any insights they may have on artifact interpretations.

“It gave me great pleasure to have my wife Anita and my granddaughter Ashleigh along with me as we stood on the very site that Ransom Williams and his family lived on. I enjoyed the fact that we were a part of the research,” Bunton says.

Beyond helping the Antioch community and former Manchaca residents understand their past, Franklin hopes the research will also benefit the University of Texas community.

“It goes without saying that the area around Austin is rich with history and prehistory,” says Franklin. “Working locally would not only give students an opportunity to learn more about the past in this region, it’d give them the chance to actually contribute to bringing it to light.”

Franklin says she understands the lure to students of digging in faraway places.

“But there’s an equally intriguing past here in this region that speaks just as readily to the diversity of the human condition, and more specifically to how Central Texas came to be what it is.”

Lee, Franklin’s graduate student, has come to understand that. After spending a hot summer excavating the site, she has decided to write her dissertation about the Ransom Williams Farmstead Project.

She was originally drawn to history by her mother, who collected their family history and used to take her to museums frequently as a child. But it wasn’t until a ninth grade field trip to Colonial Williamsburg that she discovered a love for archaeology.

“I initially correlated archaeology with the fancy finds frequently seen in Egypt, so I was intrigued how the archaeologists at Colonial Williamsburg were piecing together the lives of early Virginians (black and white) using mundane objects,” Lee says.

She believes the Travis County site has the potential to help diversify Texas history books and to present new conceptions of what can and should be deemed historically significant.

“I hope this project will affect the study of archaeology at The University of Texas by encouraging scholars to see the broader impact of the work that they do both in and out of the classrooms,” Lee says. “Burgeoning scholars at UT face the challenge and academic responsibilities to fully live up to the school’s mantra to make a difference.”

View a slideshow of items found