Psychologist Carin Perilloux is looking into a crazy little thing called love—and finding out why it’s so complicated when that special someone meets the parents.

Good looks, personality, religion and earning potential may all come into play when choosing a serious sweetheart. But Perilloux, a doctoral candidate at The University of Texas at Austin, determined those traits don’t stack up exactly the same when comparing the preferences of college students to what their parents want for them in a mate.

“There’s no ideal mate. We have to trade off traits,” Perilloux says. “We hypothesized that the tradeoffs would differ between parents and offspring.”

Examining an issue that’s close to everyone’s heart, Perilloux and fellow evolutionary psychologists offer new insight into mate selection in an article in the journal Personality and Individual Differences published earlier this year. Perilloux, also an assistant instructor, and her co-authors take their research into a new realm by comparing college students’ ranking of traits in an ideal mate with their parents’ rankings. Previous studies focused separately on students and parents.

These parent-offspring opinions offer an obvious contrast, which the researchers suggest is based in part on
evolutionary interests. Parents can increase their chance of genetic success in future generations possibly by influencing their offspring to select a mate with certain characteristics. Offspring get more immediate benefits in a mate, and therefore prefer different traits such as physical attractiveness.

“Sometimes parent-child conflicts over mating issues are just a natural thing,” says Psychology Professor David Buss, Perilloux’s adviser and a co-author of the study. “It’s not necessarily a sign of a dysfunctional relationship or horrible parents or horrible kids.”

Perilloux says her findings can help students in maintaining a productive dialogue with their parents and “maybe trying to get each other to see a little bit more eye to eye.”

Lila Situ, 20, a junior psychology major from Houston, says the findings ring true. She puts a priority on dating people who are physically attractive and have a fun personality.

“Everyone is trying to be beautiful and look for that kind of stuff,” Situ says. “I feel like, yeah, my mate does have to have an exciting personality.”

However, parents care about earning potential, Situ says, and she suspects that differs depending on the child’s gender.

Undergraduate psychology students volunteered for the study, which asked them to rank the traits that are most important to them when choosing an ideal long-term mate.

A total of 217 female students and 100 male students took part. About half had at least one parent take the survey, and among the parents, 121 mothers and 117 fathers participated. The students received extra credit to delve into a topic that apparently intrigued them.

“Believe it or not, undergrads are really interested in mating,” Perilloux says.

“Physically attractive” was the number one trait for male students. That was followed by “intelligent,” “kind and understanding” and “exciting personality.” For female students, “kind and understanding” topped the list, followed by “intelligent” and “exciting personality.” “Physically attractive” ranked fourth — still relatively high on the list of 13 traits.

Such emphasis on physical attractiveness appears to be part of a cultural trend, Buss says.

“I think the most likely explanation is just the drastic increase in media images,” says Buss, who has extensively studied the psychology of human mating. “Now we’re just bombarded with attractive images, and everybody’s got smart phones and computers and DVDs.”

Attractiveness and an exciting personality also rank high, Perilloux contends, because the students are looking for the immediate benefits in being with a mate.

And, less consciously, physical attractiveness tends to be associated with “good genes” and can provide a genetic boost, she explains.

Among the parents, “physically attractive” and “exciting personality” were far down the list. At the top for most fathers and mothers was “kind and understanding,” followed by “intelligent” and “healthy.” Parents ranked “college graduate” and “good earning capacity” high. Notably, “religious” was another trait the parents emphasized much more so than the students.

Perilloux theorizes the importance of religion for parents isn’t about how devoted to a religion someone is, but whether the person is the same religion as the mate and what that means for group membership and cooperation.

“They want to know: Is this new person entering our family going to fit in?” she says.

Ted Huston, the Amy Johnson McLaughlin Centennial Professor in Home Economics in the College of Natural Sciences, has researched the processes of mate selection and says the study provides a new context in which to look at mate preferences. The fact that kindness ranks high among all those surveyed is significant, he says. His own research has shown it is an extremely important factor in marriage.

One of the most surprising results for Huston was that young people ranked an “exciting personality” so high. For him, that conjures up visions of a potential clash if a student takes his or her new love home to meet the parents.

“I can see some sparks flying with some of those differences,” he says.

Huston, who also holds a professorship in psychology, predicts some of the students’ preferences will change as they age and enter the work world. In the meantime, he says, college students might simply avoid introducing a boyfriend or girlfriend to the parents if it’s not a serious relationship.

Ginger Woods, a sales associate in San Antonio, has a 26-year-old daughter who graduated from The University of Texas at Austin and a 22-year-old son who is a student at Hallmark College of Aeronautics in San Antonio. She says the research seems to reflect her own family’s experience.

As younger adults, her children preferred dating people they found to be exciting and physically attractive. Case in point: her daughter’s attraction to scruffy-looking rock musicians. The parents were skeptical, but tried not to judge, Woods says.

“Even people who are in very successful rock bands don’t make very much money,” Woods observes. “They really don’t.”

Most of all, she says, she and her husband want their children to be with people who show respect and have common life goals. Woods says her children gradually are figuring out what motivates them, which is, in turn, changing their preferences for potential mates.

“They’re both turning into what your parents expect you to be,” she says.

Abigail Storm, a 19-year-old freshman from the Dallas area majoring in government, says people her age just want to have fun.

“I definitely think it will change as you get older,” she says. 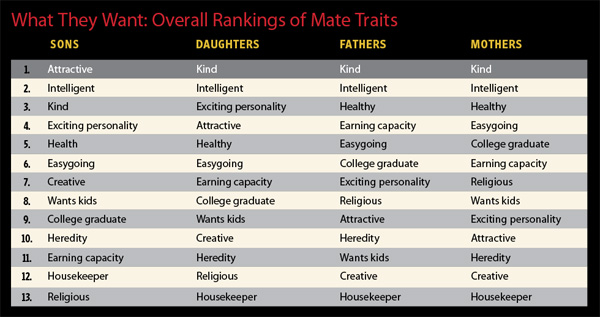