A staunch defender of beauty, Harvard University professor and award-winning author Elaine Scarry shows how appreciating aesthetic pleasures can press us toward a greater concern for social justice in her book “On Beauty and Being Just.” Drawing inspiration from writers and philosophers – as well as her own personal experiences – Scarry shares some provocative insights into the transformative power of beauty in our surroundings.

She sat down with Humanities Institute Director, Pauline Strong, for a discussion about beauty – and how it has become taboo in American society.

What spurred your interest in beauty and social justice?

Like many people in the humanities, I was drawn to the study of literature and art because of the beauty of the objects being considered. I gradually became aware that though the humanities puts beautiful objects in front of us everyday, that aspect of the work was not being talked about and was even being rejected. So when I first started teaching a graduate course on beauty in the early 1990s it was partly for the sheer pleasure of reading and talking about beauty. But the second reason was that I thought this was an important ethical failure, to stop talking about beauty and even inhibit discussion.  After finishing my book, “On Beauty and Being Just,” and giving lectures, it became clear that the taboo against beauty in the university was also characteristic of other institutions – museums, architecture studios, design schools – in each of these institutions people told me that they were under taboo, and this was true not only in the United States but in other countries as well.

What does it mean to be “beauty blind”? How is this a problem in our society?

If great philosophers from the past are right, and I think they are, beauty is a call for us to educate ourselves and to care for the world. Being beauty blind means that we are cutting ourselves and generations of students off from a very powerful tributary that brings us to a concern with educating ourselves and repairing the world. When beauty was under taboo advertisers continued to use it extensively, and I don’t have objection to this, except that it leads to a very erroneous idea, which is that when you see something beautiful you should buy it. The great philosophical tradition tells us, instead, that when you confront something beautiful you should begin to educate yourself and repair the world.

In your book, “On Beauty and Being Just,” you draw inspiration from great philosophers, such as Homer and Plato. Could you highlight an important insight by one of these thinkers?

There are many passages in Plato about beauty, and one that I especially like is where he talks about how beauty has clear discernibility. He says that beauty and goodness and justice all reside together in the immortal world, but beauty has a special generosity in that it resides in the sensual world – it is right before our eyes and ears – and thus it can lead us to the other two. Goodness and justice are certainly just as real as beauty, but not as clearly discernible. Beauty is like a bright red ribbon that leads us to the other two, which aren’t as readily available.  Other writers, for example Aquinas, talked about the quality of clarity, or claritas, in the beautiful vision.  Other people over the ages have talked about beauty as a call, and I think they are getting to the same idea. Beauty comes out to greet us and prepares us for the other undertakings, for finding out about truth and committing ourselves to justice.

Is there a continuous thread through all of your work, beginning with your first book on “The Body in Pain”?

Often people say that I write on many different subjects, but I think that I’m always writing on the same subject. The subtitle of “The Body in Pain” is 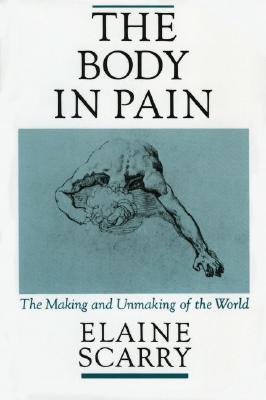 “The Making and Unmaking of the World.” The book is both about the phenomena of injuring and willfully inflicting pain and about all the issues of injustice, on the one hand, and the issue of creating, which takes us to beauty and the imagination, on the other hand.  All of my work is following out one of those two paths.  When I started working on “The Body in Pain,” I didn’t think that I would end up writing about creation and the making of the world, but for people in very serious forms of pain—cancer victims, burn victims, torture victims – it’s almost impossible to create because the world is contracting on account of the pain. I came to see that the work of beauty is really the diminuation of pain and injury. They are counterparts to one another. That idea became the framing architecture of “The Body in Pain,” and my other works continue to explore one or the other of the two forks in the road.

You talked about the humanities at the beginning of this interview. Would you comment about the interdisciplinary nature of your work?

There is a passage I love from John Locke’s “Of The Conduct of The Understanding,” in which he says the surest way to stop thinking is to only talk to people in one field and only read in one field. Reading and talking across fields is of great assistance in thinking clearly. One of the odd things is that when one is an undergraduate one gets all the benefits of cross-disciplinary work, and then we begin to close in on the circle of readings. I feel that even in the cases when I’m listening to a lecture in another field that’s not about my own work, nevertheless it keeps my mind open and full of sunlight.

About the author: Scarry is the Walter M. Cabot Professor of Aesthetics and General Theory of Value at Harvard University. She has received many accolades, including the Truman Capote Award for Literary Criticism and honors from the American Academy of Science, National Humanities Center, Guggenheim Foundation and the Berlin Institute for Advanced Studies. Her essays have been included in several magazines and anthologies, including “Best American Essays,” three times, in 1995, 2003 and 2007. In 2005, Foreign Policy and Prospect named her as one of the world’s 100 leading intellectuals.

She has published seven books, two edited volumes, and numerous essays. Her first book, “The Body in Pain: The Making and Unmaking of the World,” highlights the impossibility of expressing pain through words. This important book went beyond an analysis of classic literary texts to examine philosophy, medical case studies, personal injury trial transcripts, and documents of torture compiled from Amnesty International.