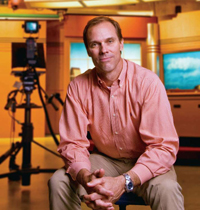 Turn on any cable news channel during an election year and you will find these and many other popular misconceptions about American voters often repeated by political pundits, says Daron Shaw, associate professor of government who has worked as a strategist for the 2000 and 2004 Bush election campaigns and serves on Fox News Channel’s national decision team.

“Unfortunately, many of the conventional wisdoms parroted by the media are either contentious or flat out wrong,” Shaw says. “They’re based on faulty assumptions, limited data, or lack of historical context. and the way the media sometimes characterize shifts in political behavior—such as polarization or swing voting—doesn’t do justice to the true dynamics at work.”

The researchers drew upon more than 50 years of historical data from the American National Election Studies (ANES) and the University of Michigan’s Interuniversity Consortium for Political and Social research, to identify long-term trends in voting behavior and debunk many of the myths that contribute to popular misunderstanding about who votes and why.

Another way Shaw injects an academic perspective into the media’s election coverage is through his role on Fox News Channel’s national decision team. On election night, he analyzes polling data provided to the media by the National election Pool, pointing out trends and advising the network when to make calls.

Since joining the decision team in 2002, Shaw has gained a new appreciation for the tough decisions journalists have to make under tight deadlines.

“Reporters need to tell stories about the election, and they often don’t have the luxury of time for thoughtful analysis,” Shaw says. “many of them have decades of experience in the trenches. But, in focusing on election stories that have high news value, the media tend to underemphasize the stability of our system in lieu of more sensational stories, which can have negative consequences for public discussion.”

So the next time you turn on the television and are confused by conflicting messages from political analysts, here is the antidote. read on as Shaw breaks down two of the biggest myths about contemporary American voters.